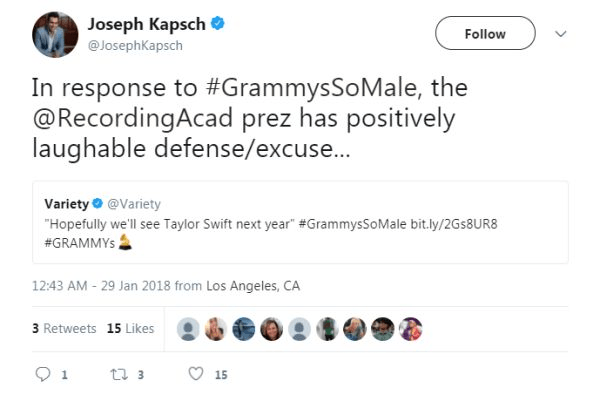 The group representing the music industry has proven itself tone-deaf.

After the Grammys program concluded Sunday night, with Bruno Mars grabbing many awards and men taking home most of the trophies, a Twitter hashtag (#grammyssomale) called out a gender gap in recognizing accomplishments in music.

Every show business awards group should prepare for a discussion about gender parity, but it seems the Recording Academy got caught off guard.

The official response, from academy president Neil Portnow, was to say that women have to work harder and be more creative.

The Twitterverse wasn’t pleased with the Grammys programming, nor the subsequent messaging, in light of the #MeToo movement and cultural reckoning with gender disparity.

It’s obvious: They threw a woman with a critically acclaimed (and otherwise ignored) album in the top category in order to side-step the #GRAMMYsSoMale conversation.

4 pop goddesses nominated and the award goes to the generic pop stylings of Ed Sheeran. #GrammysSoMale

Others were furious that New Zealand singer Lorde, the only female artist in the running for Album of the Year, was not offered a solo performing slot.

While fans were hopeful that the “Green Light” singer was going to sing at the 2018 Grammys, multiple reports say it just won’t happen this year.

TMZ reports that Lorde was hoping to perform one of her songs from her nominated album Melodrama. After all, she is nominated for Album of the Year.

But according to Variety, Lorde was only approached to perform with other artists during the tribute to the late Tom Petty. The song she was reportedly offered to sing was “American Girl.”

Artists tried to have their own #MeToo moment at the Grammys, wearing white roses as a sign of support for the Time’s Up initiative—but the awards and the messaging from the Recoding Academy sent a different message.

“I don’t have personal experience with the kinds of brick walls that (women) face,” Portnow continued. “But I think it’s really a combination of us in the industry making a welcome mat very obvious: creating mentorships, creating opportunities, not only for women, but for all people. And moving forward, creating that next generation of artists who feel like they can do anything and say anything.”

The Recording Academy did not offer Lorde an apology for the performance snub.

Grammys producer Ken Ehrlich was asked more bluntly by another reporter whether it was “a mistake” to not invite Lorde to perform.

“I don’t know if it was a mistake,” Ehrlich said. “These shows are always a matter of choices, and we know we have a box and the box gets full. She had a great album, but there’s no way we can really deal with everybody. Overall, we did the best we can to make sure it’s representative of our show.”

The message from the Grammys leadership was seen as woefully tone-deaf and ignorant of the current cultural moment:

Women have stood up. Once again they were silenced tonight. Music about overcoming sexual abuse and lack of women’s rights got beaten by generic pop fodder, that, ironically, talks about women and their bodies. Women stood up. You didn’t listen. #GrammysSoMale #TimesUp https://t.co/XMlX9VirTZ

Others tweeted stats to illustrate the gender gap:

Now the academy must try to walk back some of Portnow’s words or address the gender gap in other ways.

Other industry groups should take note: A lack of honest messaging about gender and sexual harassment will not slide this year, and key spokespeople should craft astute and sensitive responses for the hard questions they will face.