You give a little, you get a little.

That’s the philosophy of the LBJ Express Marketplace, a program developed by the project team behind a sweeping interstate construction project in the Dallas area and its agency, Griffin Strategies. Consumers get something in the form of loyalty discounts and specials. Businesses get free advertising, a spot in a directory, and, hopefully, new customers. The highway project team gets a captive audience of people directly affected by its construction work, and maybe a little extra good will from the community.

The success of that plan coming together makes LBJ Express the winner of PR Daily’s 2012 Corporate Social Responsibility Award for Best Stakeholder Engagement.

The LBJ Express team began meeting with local business owners as early as spring 2011 for online brown-bag briefings, but it wasn’t until the fall that the idea for the marketplace came about. LBJ Express initially pitched the idea of giving customers loyalty key chains for discounts at participating businesses and sending those same customers email blasts at one of those briefings, and through direct mail.

Eventually, team members decided they’d have to expend some shoe leather, however. In January and February 2012, team members visited about 800 local businesses. Some of those businesses were prohibited from participating because of corporate or franchise policies, but more than 350 have signed on to participate, displaying marketplace posters on their walls or doors.

Griffin and the LBJ Express team worked with the local chamber of commerce to publicly launch the marketplace. The LBJ Express team has remained involved in the community, participating in fashion shows, concert festivals, and gas card giveaways. It’s handed out more than 20,000 discount key chains.

As a result of all this, businesses in the heart of the construction zone said they saw their sales actually go up in 2012. Meanwhile, consumers seem to be much more plugged into the progress of the highway project.

Want to get recognized for your hard work? Find out about Ragan and PR Daily’s award programs here:
http://www.prdaily.com/Main/RaganAwardsPrograms.aspx 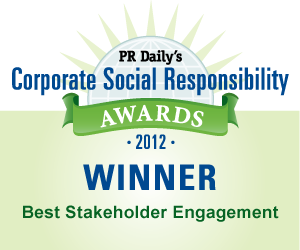