Imagine the parking lots at 180 retail stores converted into miniature cities, with buildings, streets, and traffic signs. It was all part of a comprehensive effort at 180 stores across Romania—each with both employees and traffic police officers on hand—to educate children about traffic safety.

Traffic safety was once part of the curriculum young children studied in school, but the program was eliminated from formal education, leaving children at risk; from January through August 2014, 288 accidents resulted in 30 children dying and another 261 seriously injured. That was an improvement from 2013—the first year Lidl ran the program—but the continued tragedy inspired the company to expand the program to more stores in order to reach more children and families.

Getting the target audience to the stores was a key challenge, one that was addressed with a media campaign designed to reach 50 percent more people than in 2013. Ultimately, more than 41,000 people attended the event, which generated considerable press attention, with more than 200 articles appearing in the media, almost all of which contained key messages. In addition to the thousands who attended in person, the most important messages reached more than 10 million Romanians, nearly double the initial objective.

For taking tangible and innovative steps to reduce traffic fatalities and injuries among children, we award the prize for Best CSR Event in PR Daily’s 2014 Corporate Social Responsibility Awards to Lidl Romania’s PR team of Georgiana Tugearu, Raluca Tighiliu, and Maria Parvuleasa, along with their partners in the effort, Golin Romania, Wave Division, and GPD Idea. 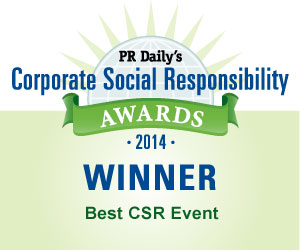