ConAgra Foods targeted a well-defined audience to drive awareness of its program to get meals to children who receive free lunches during the school year but often go hungry during the summer when school is out. As many as 21 million children take advantage of federal nutrition assistance when school is in session, but more than 18 million have no access to these meals during summertime.

By identifying moms in the age 30-45 demographic, married, with children under 18 at home, who believe in voluntarism, ConAgra was able to spread the word through their example, which was triggered by a simple call to action: Watch a video on the issue of child hunger in America and the company would donate the monetary equivalent of a meal to Feeding America, a charitable institution that provides meals to children living in “food insecure” households.

For the video, the company and its PR agency partnered with the producers of Kid President, one of the rising stars in the increasingly important world of YouTube celebrities. Leveraging the series’ popularity, the campaign generated more than 1 million views, each of which represented a donation. In addition to generating the financial equivalent of more than 1.1 million meals, the campaign also produced 23 million mainstream media impressions and 37 million social media impressions, an impressive 378 percent of the goal.

For raising awareness that resulted in tangible action that allowed thousands of children to enjoy their summer without hunger, we are pleased to present the award for Best Media Relations/PR Campaign in PR Daily’s 2014 Corporate Social Responsibility Awards to members of the ConAgra Foods and Ketchum teams. 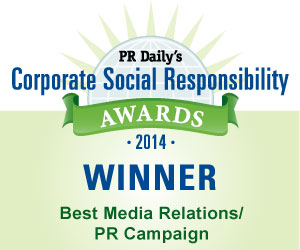