In China, where omnipresent advertising has existed for a quarter-century at most, graffiti ads dominate public advertising.

Genedigi MSL Group, a communications agency in mainland China, seized the opportunity to wage a campaign for travel agency Shijiebang that used location-based tactics to put Shijiebang on the Chinese consumer map for travel services—at next to no cost to Shijiebang.

For this feat, Shijiebang and Genedigi MSLGROUP have been judged the winners of the Best Location-Based Campaign category in PR Daily’s 2014 Digital PR Awards.

Genedigi’s location-based tactics used a photo of the underground, edgy “graffiti ad” posted next to Genedigi’s elevator to publicize Shijiebang’s WeChat platform on the Sina Weibo account of a Genedigi employee to get people buzzing about Shijiebang.

The graffiti-like ad was created on a PC. The ad featured a large QR code icon and three blocks of text: “Documents for Going Abroad,” “Cheapest Prices,” and “Please Scan” (next to the arrow pointing to the QR code icon).

Then Genedigi and Shijiebang sat back and waited. Here’s what happened:
• Four days after the post, Shijiebang’s WeChat fans jumped 667 percent.
• In four days, the Shijiebang Weibo platform gained more than 3,000 new followers.
• The Weibo post received 486 comments and 39 likes.
• Weibo impressions exceeded 2.9 million on more than 4,000 reposts.
• Four top domestic video platforms broadcast the Shijiebang story.
• Two local TV stations picked up the story and gave it 95 seconds.
• One of the most popular newspapers in China ran a half-page story.
• The estimated campaign ROI was $100,000, more than 10,000 percent.

Congratulations to Genedigi MSLGROUP’s Sun Lu, senior director of business unit 3, and Lu Xin, general manager of the marketing division, for their work on this path-breaking campaign. 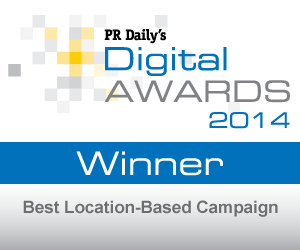