StartupNation is a 130,000-member website that attracts some 3 million users per year who access resources and networks in pursuit of their own startup and entrepreneurial success. The company—founded by two entrepreneurial brothers—had been running its Leading Moms in Business competition for a couple of years. Because the peer-voting competition produced the only ranking of mom-owned businesses, it attracted attention in the business media and the entrepreneur world. The 2013 contest featured a new element: a Fortune 100 premium sponsor, Staples, which added cash and other elements to the prizes while enhancing visibility.

A comprehensive and integrated effort to draw attention to the contest led to more than 1 million visitors to the site, an impressive 27 percent increase over 2012. The other metrics are equally impressive, as is the execution of this campaign by Digital Marketing NOW, which implemented a graphically appealing and appropriate campaign across earned, paid, and social channels.

Tom Shapiro, CEO of Digital Marketing NOW, and his team have earned our sincere congratulations for their win of the Best Online Contest/Game category in PR Daily’s 2014 Digital Awards. 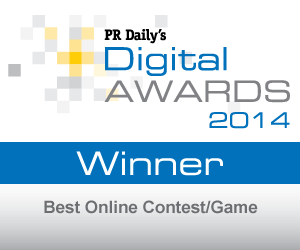