The nurse house supervisor was on the Children’s Hospital Colorado media pager at 1 a.m. on Friday, July 20: “Someone shot up a movie theater. We’re ready for mass casualties,” she said.

At 12:30 that night, an individual had entered an Aurora, Colo., theater and begun shooting into a packed audience.

Nine minutes later, the gunman had killed 12 people and wounded another 70, “the most victims of any mass shooting in American history,” according to the CBS News website.

Children’s Hospital Colorado received six of the victims. Fortunately, its media team had written a crisis plan that leaned heavily on quick response to media requests and on social media:

Six weeks after the shooting, the media team had handled more than 250 media requests. Overall, 6,420 stories mentioned or included Children’s Hospital Colorado. The hospital’s own story posted to its website on how to talk to children about the shooting got 5,359 clicks. Its Facebook post on talking to children received 5,793 clicks and 195 shares (its most shared post to date).

For this speedy, nimble, in-depth media response to a terrifying tragedy, the media relations team at Children’s Hospital Colorado is the clear winner of the Best Response to a Crisis category in Ragan’s 2013 Health Care PR and Marketing Awards. 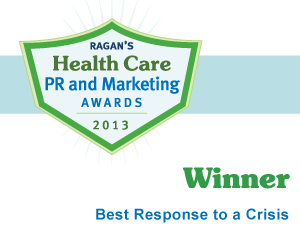