It’s a parallax that so many of life’s greatest causes often face the downfall of also having the least means of garnering awareness.

So was the case for Spectrum Health, where a Bone and Marrow Transplant (BMT) program faced the ambiguous task of getting attention without a budget to go on.

Thankfully, many of social media’s best tools and platforms don’t require any money—simply time and an idea.

And an idea, Spectrum had.

Taking advantage of just one of the many opportune features of Google+, Spectrum’s team organized its BMT Google+ Hangout, shown below:

Held on April 3 with patient Kevin VanZanten and participants who included Stephanie Williams, M.D., division chief, adult blood and marrow transplant program, the Hangout provided Spectrum with more than just a space befitting of a company deficient of a budget.

Due to Kevin’s compromised immune system, the marketing and communications team determined neither a traditional press conference nor live media interviews would be best for him. After exploring the unique characteristics of the Google+ feature, it was decided that Hangouts could and would accomplish all three of the effort’s goals:

Furthermore, the platform provided a public forum whereby friends, families, loved ones, and experts on BMT could easily gather and share firsthand experiences, ask questions, and provide a better understanding of what is justifiably a daunting ordeal for anyone to go through alone.

Thanks to the Hangout, those in attendance didn’t have to.

Between that and the 46 viewers who took part, as well as the 575+ others who have since viewed playback of the Hangout—including partakers in six other countries—the effort can be marked a true success.

And it’s because of that success Spectrum has earned top honors in the Best Use of Social Media (Other) category in Ragan’s 2013 Health Care PR and Marketing Awards. 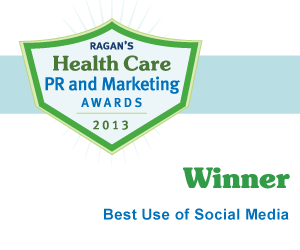