You know you have a winning entry on your hands when you open it and realize you’ve seen it before—more than once.

So compelling was this infographic that it made the rounds through social media, not only capturing the attention of James Bond fans (and who isn’t one?), but creating buzz around the reality-vs.-myth approach adopted by The BMJ,  formerly known as The British Medical Journal, and Makovsky Health in their effort to raise awareness of the dangers of excessive alcohol consumption.

Creating infographics can be a perilous undertaking. This infographic, however, was brilliantly conceived as part of an annual tradition for The BMJ, which uses its Christmas edition to share quirky medical news. Using Ian Fleming’s iconic James Bond novels (not the movies) as its resource, the team of Lee Davies, Jon Florio, and Kyle Kosterich used familiar imagery and sparse text to convey the impact of 007’s drinking if he were a real person. (Bottom line: He would be dead at 56.)

The tongue-in-cheek title of “The Man With the Golden Liver,” coupled with other referential subheads (e.g., “The Spy Who Loved Booze” and “Tomorrow’s Hangover Never Dies”), helps the infographic make its case for moderation in the most entertaining of ways. To make the asset even more valuable, it was coupled with study materials for additional information. More than 180 articles featured the infographic; publications taking advantage of it included Time, Forbes, the New York Daily News, the New York Post, Vanity Fair, and Fast Company. An audience of 130 million saw the graphic; through Twitter alone, it found its way to 15 million people.

Our congratulations go to The BMJ team that brought the martini-soaked secret agent back to life in so useful and clever a fashion and won the Best Infographic category in Ragan’s 2014 Health Care PR and Marketing Awards. 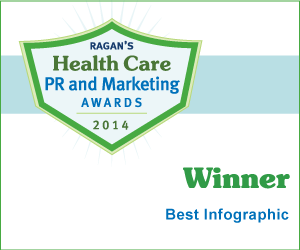