The goal couldn’t have been simpler: Keep tobacco out of kids’ hands. The U.S. Food and Drug Administration contracts with states, territories and American Indian and Alaska Native tribes to help meet that goal. The approach to that objective taken by Kauffman & Associates, a woman-owned, Native-American owned firm, and its client, the FDA, has won first place for “Best Print Publication” in Ragan’s 2016 Health Care PR and Marketing Awards.

Reducing smoking in American Indian youth (where it is significantly higher than national averages) is an important goal for tribes, but one that is complicated by tribal traditions of ceremonial tobacco and the much-needed economic benefits that flow to impoverished tribal areas from commercial tobacco sales. Another challenge is reaching the audience at all, given the lack of broadband communication on many reservations.

Kauffman’s solution? They produced a publication for tobacco retailers covering the laws and regulations pertaining to tobacco and youth. In addition to print material, the publication contained a video screen controlled with buttons built into the page; no online access was required. Both the text and the video address situations common in tribal life.

The marriage of technology and traditional print to deliver a message is impressive enough to undoubtedly drive recipients to read and watch it. 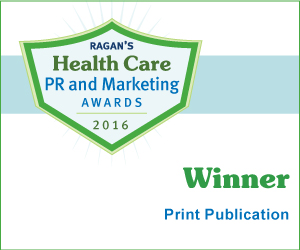