The fight over bigotry and discrimination against LGBT people may be far from finished, but a moving four-minute video from Cardinal Health, a leading health care services company, shows that change is gathering strength, and it’s coming faster than many believed possible. The video, titled “Be an Ally,” is an inspiring call to practical action on behalf of LGBT workers among Cardinal Health’s 34,000 employees. It has also made Cardinal Health the winner of the “Best Use of Video” category in Ragan’s 2015 Intranet Awards.

Cardinal Health’s top leaders had the courage to recognize that this video was necessary for their organization. They showed their courage by spelling out their LGBT policies uncompromisingly:

“Be an Ally” received 337 views and 104 likes on Cardinal Health’s internal social network, and 612 YouTube views. Cardinal Health shared social posts linked to a video on LinkedIn that got 39,000 impressions, 79 clicks, and 49 interactions. Since the video went live, 737 Cardinal Health employees have signed the “Be an Ally” pledge. 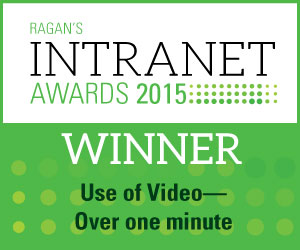