Competing with Apple’s iPhone for a share of the media’s attention is no easy task.

That was the challenge Samsung Mobile gave its PR firm, MWW, in the lead-up to the launch of the Galaxy Note mobile phone. The device’s screen is a full inch larger than that of the iPhone. MWW was tasked with convincing the public that a larger screen is a better option among smartphones.

The 12-month campaign, which spurred billions of media impressions and fueled the sale of millions of phones, earned Samsung Mobile and MWW the Grand Prize of Media Relations Campaign of the Year in PR Daily’s 2012 Media Relations Awards.

Samsung wanted to position itself as a trendy, entertaining company with the launch of its Galaxy Note, appealing to the highly sought after 18- to 35-year-old demographic.

To make this happen, Samsung Mobile products had to appear in the pages of long-lead magazines and on television, as well as maintain a place in tech and business outlets.

Easy, right? Hardly. Other companies had tried and failed to appeal to consumers with a larger-screen device. MWW studied these failed launches closely.

Based on these lessons, MWW positioned the Galaxy Note as the first smartphone designed for content creation. The device features an S Pen, which is a stylus—a sort of pen for digital screens—with which users can write and draw on its screen.

The company partnered with caricature artists, as well as PGA Tour Golf, Urban Daddy, Fashion Week, and game-maker Rovio (which created the wildly popular Angry Birds) for a series of events to showcase the device’s precision.

On the day the smartphone was unveiled at the Consumer Electronics Show in 2012, it gained a 44 percent share of voice among smartphone media coverage.

But that was merely the beginning.

Better yet, the success of the campaign helped drive global Galaxy Note sales to more than 10 million devices. 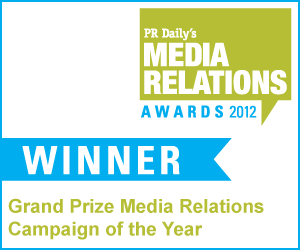