Throughout its history, the Buchanan’s brand of Scotch whisky has been characterized by its vision of leaving a positive mark on the lives of others—a vision brought to life by Diageo Latin America and Caribbean in 2007 through the “Buchanan’s Forever” campaign, featuring exclusive concerts for charity across Mexico, Colombia, and Venezuela. After three successful years, Buchanan’s decided it was time for a new model: Tiempo para Compartir, which means “Time to Share.” The campaign set out to move consumers beyond donations to active volunteer work. Its success won brand communications agency Dialogue first place in the Best Global Media Relations category of PR Daily’s 2013 Media Relations Awards.

Using an engagement model of celebrating volunteer work with live music events, Buchanan’s provided consumers in Latin America with a vehicle to allow them to get actively involved in volunteer activities driven and facilitated by the brand. In exchange for four hours of their time, volunteers would be rewarded with a ticket to an exclusive concert celebration featuring internationally renowned artists like the Smashing Pumpkins and Maroon 5.

The “Time to Share” campaign officially launched in March 2012, with simultaneous press conferences, exclusive influencer events, direct marketing, and social media across Colombia, Mexico, and Venezuela. The regional communications team, led by Dialogue, relied heavily on an influencer strategy to recruit the right target audience. Due to the highly visual nature of the movement (consumer volunteerism, concerts, celebrity artists), the strategy relied on extensive use of still and video imagery to communicate the movement’s reach and success, targeting consumers with visuals and vignettes on the latest projects, influencers who volunteered, people who benefited, and artists who joined.

After three months of recruitment efforts, the movement successfully met its goal, with 6,500 volunteers participating in dozens of volunteer projects in Bogota, Caracas, Guadalajara, and Mexico City, contributing a total of 26,000 hours of community service. To celebrate their success, three exclusive concerts were held for the volunteers: the Smashing Pumpkins performing in Bogota and Caracas (a first-time visit in Venezuela), and Maroon 5 headlining in Mexico.

Here’s offering a well-deserved toast to Dialogue for its successful campaign. 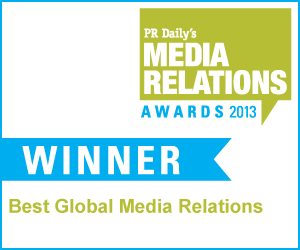