On May 24, 2013, while the rest of America spent the Memorial Day weekend celebrating what a great country it is that we live in, one of our nation’s youths—a then 10-year-old girl by the name of Sarah Murnaghan—was left direly waiting due to an inane government policy that prevented her from getting the new lungs she so critically needed.

That same day, Sarah’s family and friends—many with PR backgrounds and who dubbed themselves Team Sarah—launched an aggressive grassroots PR and public policy campaign that included a successful Change.org petition. The petition shed light on the story of this brave young child that would eventually help change things for more than just Sarah.

The petition served to draw attention to the “Under 12” rule—a little-known U.S. organ transplant policy that placed children under age 12 at the bottom of the organ allocation list. This meant that Sarah, who suffered from cystic fibrosis and was in critical condition with failing lungs, had little hope of receiving her new organs.

Hearing about the young girl’s plight early on, a team member at Buchanan Public Relations was made aware of the family’s story and immediately reached out to its law firm client Pepper Hamilton, joining others who asked the firm to consider the case.

After discussion, Pepper Hamilton chose to take on the case pro bono.

When Secretary of Health and Human Services Kathleen Sebelius refused a request to make an exception for Sarah, the family and its new Pepper Hamilton attorney, Steve Harvey, filed an emergency petition.

On June 5, a federal judge issued a temporary 10-day restraining order (TRO) to prevent Sebelius from enforcing the rule, meaning that Sarah could now be considered to receive donor lungs based on the severity of her condition rather than her age.

Immediately following the judge’s temporary ruling, the case of Javier Acosta, a child in the same hospital under the same circumstances, also came to Pepper Hamilton’s attention. The next day, Harvey and a team of colleagues filed for and were granted the same TRO that Sarah Murnaghan had obtained.

Because of the sensitivity of the situation and Sarah’s and Javier’s constantly changing medical conditions, it was extremely important that all media outreach be coordinated strategically and from Pepper Hamilton’s legal standpoint. The Buchanan team worked closely with Team Sarah, which was representing the Murnaghans pro bono. It was also important that none of the messaging be self-serving, but positioned only to raise awareness of the “Under 12” rule.

By actively researching previous media coverage of the story and creating detailed media lists, Buchanan PR proactively and reactively reached out to local and national media—from CNN and ABC to People magazine—with breaking news as it was provided by the families and Pepper Hamilton.

When an emergency meeting of the Organ Procurement and Transplantation Network (OPTN) system was called, Buchanan PR coordinated a press conference outside the children’s hospital where the media heard from Harvey, as well as Javier’s mother, Milagros.

On June 10, Harvey gave a statement at an emergency meeting called by the Lung Transplant Board of the OPTN to re-evaluate the “Under 12” rule, where a new process was created to allow exceptions to be made for children under 12 on a case-by-case basis.

Sarah isn’t the only one to get something out of the Murnaghans’ trying ordeal, however. Aside from future generations of kids who, just like Sarah, will now receive the organs that they, too, desperately need, for its pivotal role in orchestrating this change to the “Under 12” policy, it’s our privilege to name Buchanan Public Relations and Pepper Hamilton the recipients of the prize for Best Governmental/Public Affairs Media Relations in PR Daily’s 2013 Media Relations Awards. 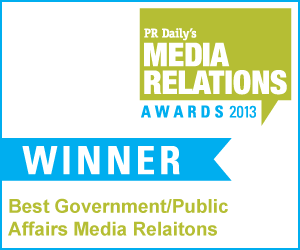