Talk about a stunt.

Create a Formula 1 race course on a temporary road in New Jersey, within sight of Manhattan.

Bring in defending champion Sebastian Vettel to speed through the 3.2-mile course in a high-performance Infiniti sports car. And invite the media to ride shotgun.

The idea was this: Formula 1 racing, with a series of races known as the Grand Prix, is one of the most popular, expensive, and glamorous sports in the world, or so Global Strategy Group tells us. (We at Ragan paint our bellies at football games, so we wouldn’t know about glamour.)

The sport appeals to millions of fans across the globe, and earns $4 billion annually. Trouble is, among those contrarian Yanks, NASCAR and IndyCar overshadow Formula 1. In fact, there have only been a handful of races in the U.S. over the past 40 years.

So Global Strategy Group sought to boost the sport and create anticipation for the inaugural Grand Prix of America in June 2014.

Results? Are you kidding?

The media stampeded to Jersey for the ride-along. Sports Illustrated showed up. The New York Times. The Associated Press. A New Yorker writer described the scribbles in his notebook as he raced around the track (“Hit head,” the notes appear to say. And also, possibly, “A bit crazy what we do”).

The stunt secured more than 100 news stories in two days. Vettel also appeared on “The David Letterman Show” to promote Formula 1 racing in the U.S. and tease the 2014 inaugural event.

And hey, Sebastian, if you ever come to Chicago, we at Ragan Communications are big believers in ride-alongs. 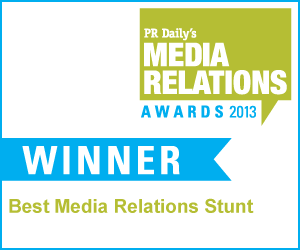