Vietnam veterans were often scorned and treated with contempt when they returned, and it took years for America to learn to respect those it dispatched to war.

Even after decades of reassessment, the task of raising awareness of a new education center at the Vietnam Veterans Memorial was a challenge.

The agency Susan Davis International oversaw a successful campaign that brought the new center to the attention of a wide audience, winning it the prize for Best Op-Ed in PR Daily’s 2013 Media Relations Awards.

The center seeks to bring to life the stories of service members who died in the Vietnam War, and it acts as a temporary memorial for the Iraq and Afghanistan conflicts.

Thus the Susan Davis team asked Army Staff Sgt. Salvatore Giunta, the first living Medal of Honor recipient since Vietnam, to put his name to an op-ed on the topic. The team emphasized Giunta’s strong belief that the hero was not him, but rather those soldiers who gave their lives.

“The veterans of the Vietnam War know what it is like to wait for a memorial to be authorized and created,” Giunta states in the op-ed. “On behalf of those who served in Iraq and Afghanistan, we are grateful that they are ensuring that a memorial for our generation will be ready to welcome the last of our troops returning from Afghanistan in 2014.”

The op-ed ran in nine daily newspapers: The Star-Ledger, the Albuquerque Journal, The Des Moines Register, The Tennessean, the Tampa Bay Times, the Courier Journal, The Post and Courier, the Union Leader, and The Boston Globe.

Running in key congressional districts, it helped inspire action on legislation. Congress passed a bill permitting the center to display the names of private contributors—necessary to secure donations for the site. 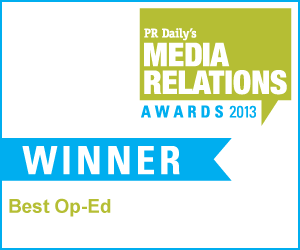