The “walk and talk” has become a symbol of modern efficiency—or at least a way to induce people to spit out their messages in a condensed time frame.

A brisk gambol and crisp concepts—even snarky banter—fill the corridors of today’s business and political worlds. Regardless of one’s political bent, it’s hard to deny that “The West Wing” capitalized on (and even popularized) that trend during its successful TV run.

A few cast members have reunited on a few occasions, sometimes in self-parody, but invariably to great effect. Funny or Die struck the right chord with a video promoting an easy, affordable, salubrious activity: walking. (Talking is optional—maybe.)

For its integration of pop culture and clear messaging, as well as its strong results, the Every Body Walk! PSA has won top honors in the Best Use of Video category in PR Daily’s 2013 Media Relations Awards.

From the submission team of Patrice Smith, David Mays, and Holly Potter from Kaiser Permanente (whom we heartily congratulate):

Since launch, there have been more than 700,000 views of the PSA. This piece elevates the visibility of the campaign to new audiences. The placements reached the general public, policymakers, consumers, and celebrity audiences with a simple health message.

There were more than 150 story placements about the PSA, most with embedded links to the spot. We captured the front page of The Huffington Post and were a top post on Politico and CNN Marquee. Other notable placements include, but were not limited to, The Washington Post, The Hill, ABC News Political Blog, Perez Hilton, ESPN, and the L.A. Times.

The familiar comedic schtick aside, the message comes through clearly: Walking does a body a lot of good and can head off a great many adverse conditions. 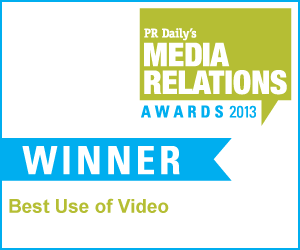