Many people know the work of the World Wildlife Fund and instantly recognize its panda icon.

But how many people know the name Carter Roberts?

Well, after a highly successful campaign, Roberts is far more recognizable as the organization’s president and chief executive officer. After all, his name and picture have been featured by news outlets such as Bloomberg BusinessWeek, Forbes, Harvard Business Review, and CNN.com, to name just a few.

It’s not only news media outlets that are paying attention. Last September, Roberts was appointed by the White House to the Advisory Council on Wildlife Trafficking. Since then, the World Wildlife Fund tells us, he has been working to help craft and deliver the first-ever National Strategy for Combating Wildlife Trafficking.

Some of Roberts’ other writings have served to elevate his expertise and the organization’s mission. He commented on The Huffington Post about the United States’ removing the bald eagle from the endangered species list. He also wrote a post on the Foreign Affairs website about Earth Overshoot Day in August 2014, discussing the need for global sustainability cooperation.

We congratulate Sarah Fogel, Steve Ertel, and Carter Roberts himself for their efforts to raise the CEO’s profile, spread the word about protecting wildlife, and preserve endangered species around the world. 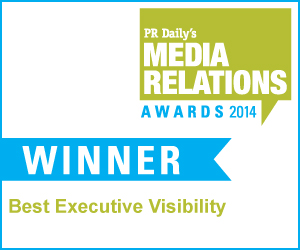