The International Justice Mission’s PR staff seized on the 2014 publication of IJM founder Gary Haugen’s book, The Locust Effect, as a way to spread word of its mission and accustom the well-educated, well-fed West to the notion that an end to hunger and ignorance in many countries will only come when their citizens are safe from rape, assault, robbery, and murder.

IJM’s PR staff promoted The Locust Effect and its seemingly paradoxical theme so well that IJM and the book reaped the incredible number of 6.3 billion gross media impressions around the world in 2014. For that heroic effort, and the equally epic results, IJM wins the Best Global Media Relations category of PR Daily’s 2014 Media Relations Awards.

The unexamined notion of tens of millions in the U.S. and Europe is, “The unfortunates in Borrioboola-Gha suffer from disease, malnutrition, and exploitation because they are poor and undereducated.”

Haugen and IJM reply, “No, these poor do not stay poor because of a lack of education. They are underfed and untaught because there is nothing standing between them and the criminals who enslave, terrorize, and kill them. They must be protected from crime first. It is as basic a human need as the need for food, warmth, and clean water.”

How to bring adequate policing to daily victims of horrible crimes? IJM and Haugen clearly believe that nationals on the scene must protect the law-abiding and bring malefactors to justice themselves. Ninety-five percent of IJM’s 600 staffers in the developing world are citizens of the nations they serve.

These are new, unfamiliar, perhaps uncomfortable ideas to many in “advanced” countries. Despite their amazing success, members of the IJM team have a difficult job ahead. Here’s how they went about it last year:
• Within six months, media impressions of coverage mentioning The Locust Effect topped 1.3 billion, half of them placed outside the U.S.
• Media coverage came from BBC News, Forbes, U.S. News & World Report, David Brooks in The New York Times, The Huffington Post, Yahoo News, and “The Today Show.”
• The Locust Effect was endorsed by Bill Clinton, Madeleine Albright, and Tim Keller.
• IJM’s promos on its social media channels reached 305 million with #LocustEffect and drew 24,000 tweets, almost 8,000 likes, and 2,500 shares.
• IJM’s YouTube video about The Locust Effect got more than 142,000 views.

The results of this unremitting hard work were equally impressive:
• Within six months, 21,000 copies of The Locust Effect were sold.
• The book sold out on Amazon.
• The Locust Effect made #8 on The Washington Post’s best-seller list, and #11 on Amazon’s Best Books of the Year So Far 2014: Nonfiction.
• Haugen was invited to speak at Google.
• Haugen attended the World Economic Forum and Constituents Meeting in Geneva in August 2014. 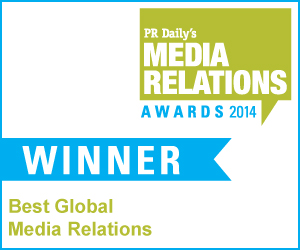