The mission had a tight deadline and called for precision. The target wasn’t a military objective, but it was strategic: the op-ed section of Time magazine. The communication consultants at DStreet in Washington, D.C., were tasked with raising the visibility of Carey Lohrenz, the first female F-14 Tomcat fighter pilot in the U.S. Navy, as she pursued a speaking career.

In the end, DStreet could proudly say “Mission accomplished,” as Lohrenz’s op-ed piece appeared in Time on the heels of the removal of the ban on women serving in combat—and won first place in the Best Op-Ed category of PR Daily’s 2014 Media Relations Awards.

The mission had two objectives: Create significant Web traffic to Lohrenz’s business page, and push negative content driven by opponents of women in combat off Google’s first search page. When Pentagon chief Leon Panetta announced the removal of the ban, DStreet recognized the opportunity to use the national spotlight on women in combat to gain significant high-profile coverage of Lohrenz. But the firm had only hours to jump on the opportunity.

The op-ed, titled “Time for some fearless leadership,” reached some 49 million people, helping with Lohrenz’s SEO and pushing negative coverage off the first search page. And the results made an immediate difference in Lohrenz’s business—she closed two deals in the two weeks that followed, prompting her to tell DStreet, “I just want you to know that your work matters.”

We congratulate DStreet’s Jennifer Dulles for her expert piloting of an important strategic project. 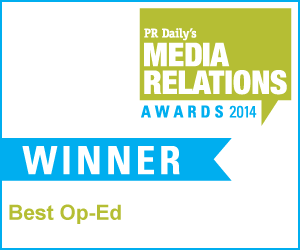