It had the makings of a movie drama, but it was happening for real: Just two weeks before the 2014 Lewiston-Auburn Film Festival in Maine, its director was arrested on child pornography charges. The festival was canceled, but that’s not the end of the story. A new festival rose in its place, thanks to the efforts of Rinck Advertising—which earned first place in the Best Reputation/Crisis Management category of PR Daily’s 2014 Media Relations Awards.

As news of the arrest broke, filmmakers began backing out of the festival, and sponsors, many of whom had already sent payment, were consulting with lawyers. With the LAFF brand permanently tarnished, the decision was made to cancel the festival—and launch a new one in its place: the Emerge Film Festival.

Rinck had to convince LAFF filmmakers to give the Lewiston/Auburn community another chance by persuading them to submit their films to the new festival. Rinck also needed to rally the public and drive the purchase of festival tickets, all while raising awareness of the Emerge Film Festival as a new entity separate from the LAFF.

The results were a Hollywood happy ending: More than 75 filmmakers brought 40+ films to the inaugural festival, upward of 40 sponsors contributed ±$60,000 in cash and in-kind services, and approximately 1,500 people attended. 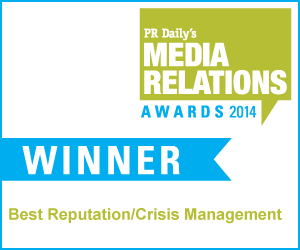