The WWF in reality enjoyed two consecutive outstanding years of superlative PR achievements: From July 1, 2012—the launch date of the WWF blitz to alert the world to the critical danger faced by rhinos, tigers, and elephants—through June 30, 2014, the WWF saw an increase in wildlife coverage by the media of nearly 270 percent.

But it was in 2013 that the WWF witnessed several important breakthroughs in the fight against worldwide crimes committed by animal traffickers:
• On July 1, 2013, President Obama designated an additional $10 million for training and technical assistance in Africa to stop animal trafficking.
• The president also created the Presidential Task Force on Wildlife Trafficking, which will receive advice from an Advisory Council of independent experts.
• President Obama appointed Carter Roberts, WWF CEO, to the above Advisory Council.
• Roberts served with Hillary Clinton and several African heads of state as a commitment-maker for NGOs to the creation of the “Partnership to Save Africa’s Elephants.”

Pitching stories about the terrible realities of wildlife crime was a big part of the WWF’s strategy to boost its agenda in 2013:
• The WWF campaign produced a 50 percent increase in mainstream global media coverage of the wildlife crisis from July 1, 2013, to June 30, 2014.
• High-profile pieces on the slaughter of big animals appeared on NBC, in Time magazine, and in The Wall Street Journal.
• The WWF was by far the most prominent NGO in traditional and social media coverage of the president’s Executive Order, mentioned in nearly 65 percent of related content on Twitter.
• In November 2013, the U.S. Fish & Wildlife Service destroyed the U.S. stockpile of seized illegal ivory. The WWF helped plan and stage this event that raised awareness.
• Several other countries followed our lead by destroying their own illegal ivory.
• The WWF’s hard work elicited unprecedented media attention and provoked strong action by the U.S. government on many conservation fronts.

Congratulations to the officers and staff of the World Wildlife Fund for their tireless work to save big (and small) creatures from extinction! 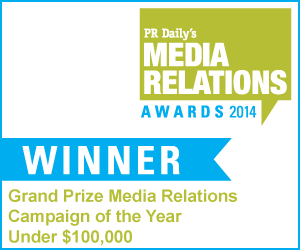