Blue Cross and Blue Shield of North Carolina faced a crisis: A new technology platform designed to handle enrollment, billing and claims processing went haywire, resulting in customers receiving no membership cards to serve as proof of coverage and no records medical professionals could use to confirm coverage. Its response to this crisis of trust has won it first place in the “Crisis or Reputation Management” category of PR Daily’s 2017 Media Relations Awards.

In addition to the problems mentioned above, the system also billed customers multiple times or withdrew money from their accounts more than once to pay for a premium. Customer calls were five times the usual volume, and many callers unable to connect to a customer service representative opted to air their grievances on social media channels, with as many as 1,000 posts appearing on each of the incident’s two peak days.

The communications team recognized that being open and forthright would result in some negative coverage and a damaged reputation. However, as they said,  ”It was time to err on the side of communicating too much rather than too little.”

The team took multiple actions, including running a statewide radio ad featuring an apology from the CEO, and media outreach to share background and let reporters know spokespeople were available when needed. The team committed to responding to every social media inquiry, scheduled an editorial board visit letting the CEO shift the conversation to ACA shortcomings, delivered a series of direct-to-customer communications, set up a blog page to serve as an information hub and used its intranet to keep employees updated.

Over time, thanks to some positive news coverage along with other outcomes of the crisis communication effort, the organization’s favorability and trust ratings began trending upwards, with significant spikes into 2017. 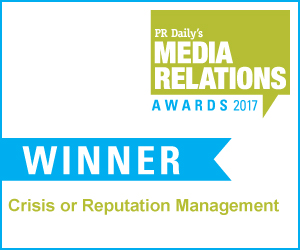