In Oklahoma, outdated liquor laws enacted during the Prohibition era mean beer and wine could be sold only in liquor stores, not grocery stores. Reform proponents were able to get updated rules onto the state ballot. Enter Candor, a public relations and business consulting agency tasked with handling the campaign’s media relations. Its success at getting the law changed has earned it first place in the “Governmental or Public Affairs Media Relations” category of PR Daily’s 2017 Media Relations Awards.

State Question 792 would let grocery stores stock cold, regular-strength beer and wine; the initiative would also change the wholesale and distribution system and expand product lines at liquor stores. However, voters would have to vote yes.

Candor’s team developed a message wheel to guide conversations, presentations and interviews. The wheel was composed of four quadrants: the economic benefits, the need to update archaic laws, the importance of consumer choice and how the new law would improve convenience for Oklahomans.

Facing opposition from liquor store owners (who had a monopoly on beer and wine) and some advocacy groups, Candor prepared opposition messaging and FAQs, outlined a dozen unique story ideas to share with reporters and held news conferences in the state’s two major metropolitan areas, live-streaming the news conferences on Facebook Live (where they drew 5,000 views, 100 shares and 50 comments). The events were also live-tweeted.

Candor hired and trained a former gubernatorial press representative to be the face of the campaign. The team pitched story ideas weekly during the campaign, maintaining a steady drumbeat of coverage that included op-ed pieces and grassroots letters to the editor from grocery store executives, the grape industry, brewers and chambers of commerce. In-house media training and press releases rounded out the campaign, which culminated in an election night watch party.

When the campaign began, only 12 percent of voters listed State Question 792  when asked about State Questions appearing on the ballot, but 130 media clips and 11 newspaper endorsements turned that around, resulting in a resounding victory for the campaign.

A toast to the team of Karen Wicker, Ally Glavas, Adam Brooks and Larisha Hunter. 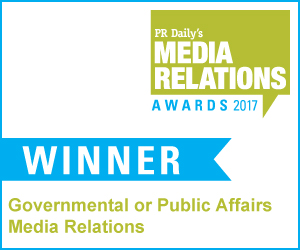