Dirty clothes aren’t the first thing that leaps to mind as a cause of student absenteeism. Executives at Whirlpool probably hadn’t thought about the issue at all, until the principal of a St. Louis elementary school asked the organization to donate a washer and dryer to the school. The principal believed some students were staying home to avoid mockery and bullying aimed at them for wearing dirty clothes. That story inspired Whirlpool to look more closely at the problem, and its solution has earned Whirlpool the Grand Prize for Media Relations Campaign of the Year Over $50,000 in PR Daily’s 2017 Media Relations Awards.

Whirlpool found that one in five U.S. students struggle with access to clean clothes. To test whether that situation could really cause absenteeism and the problems associated with it, including dropouts, unemployment and government assistance, Whirlpool undertook an experiment: It identified 17 schools with high absentee rates and equipped each one with a washer and dryer.

Working with a psychologist and researcher, the organization ensured students in those schools had clean clothes. The results proved the hypothesis: “93 percent of participating students averaged 6.1 more days in school than the previous year,” according to Whirlpool.

The study and its results made for great news fodder, leading to 409 million impressions in just two days. Among the coverage: more than 600 earned stories, including four national broadcast stories, 76 news segments and 53,000 social shares. 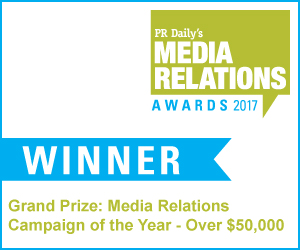