In an effort to boost TV ratings and ad revenue, Major League Baseball took the iconic Opening Day and spread it over three days, including night games. Opposition to ending Opening Day became the rallying cry of a tongue-in-cheek campaign by Kingsford, maker of one of the most iconic charcoal brands on the market. The video Kingsford produced for the campaign was so creative that it’s won first place in the “Media Relations Video” category of PR Daily’s 2017 Media Relations Awards.

Kingsford wanted to create as strong an association with the start of baseball season as tailgating has become for football games. MLB’s decision to do away with the Opening Day provoked disappointment and even anger in fans, which was all Kingsford needed to create the connection between grilling and Opening Day.

The campaign hinged on a Change.org petition from Kingsford, which included a short video starring Hall of Fame Cincinnati Reds catcher Johnny Bench. Bench conveyed a range of emotions in fast-paced clips enhanced by uncensored (but not too harsh) language.

The video helped propel the campaign to the top of sports media, generating 329 million earned media impressions and 52 million social media impressions. Three videos produced from the Bench footage were viewed 41,000 times and inspired more than 1,500 fans to sign the petition, twice the goal of the campaign. 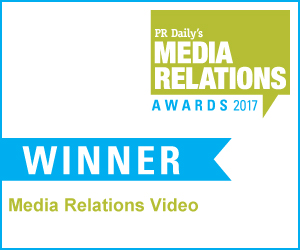