Dannon reintroduced its probiotic yogurt brand Activia with a multichannel campaign labeled, “It Starts Inside.” The campaign conveyed the brand’s new message, designed to encourage the female buyer “to overcome her inner hurdles, both physically and mentally, to unlock her potential and be her best self.” Its success has won Activia and its PR partner, Hill+Knowlton Strategies, first place in the “Press Event or Media Tour” category of PR Daily’s 2017 Media Relations Awards.

Hill+Knowlton Strategies managed a weeklong media tour with the NFL’s first female official, Sarah Thomas, immediately following the release of the brand’s new TV commercial in mid-January. Combined with the imminent Super Bowl and all the buzz it was generating, the tour of national and local top-tier media headed to Houston, host city of the Super Bowl.

A satellite media tour and audio news release kicked off the week and connected Thomas and Activia. Thomas’s story of what it took to break through the NFL officiating glass ceiling is truly inspiring, and is undoubtedly the reason why nearly 50 interviews were scheduled during the tour.

Activia experienced the side benefit of affiliation with sports, a first for the brand. The campaign produced 1,896 media placements and more than 226 million impressions, along with 68 posts and 31.4 million social media impressions. That represented half of H+K’s goal for annual PR impressions in the first month of the campaign. 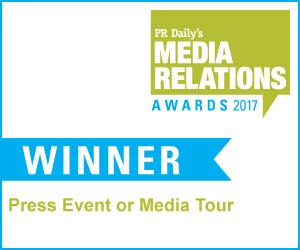