Upon reviewing Herbalife Nutrition’s five-year defense against an activist investor, one business reporter said that “the counterattack would become a Harvard case study,” describing how organizations should deal with such assaults. Herbalife’s strategy has won it first place in the “Crisis or Reputation Management” category of PR Daily’s 2018 Media Relations Awards.

The renegade investor, Bill Ackman of Pershing Square Capital Management, began his attacks with what Herbalife branded “fabrications,” although they were accepted as fact by the investing public. The organization developed a strategy designed to minimize the impact of the campaign on business performance, employees and distributors.

Objectives focused on promoting the benefits of Herbalife’s products, maintaining stakeholder confidence and exposing the truth behind the tactics and the motivation behind Ackman’s actions. To achieve these goals, the organization sought and obtained coverage in top-tier business publications, earning reports in The Wall Street Journal, The New York Times and Fortune.

The Herbalife team also launched a public awareness website in 2014 that housed videos focusing on the value the organization delivered, and another one a year later that featured news reports into probes of Ackman’s campaign and previous failed investments. Ad campaigns drove traffic to the site while grassroots efforts mobilizing distributors culminated in “Herbalife Day” at Los Angeles City Hall, which drew 2,000 Herbalife members. A grassroots campaign also pushed back against a documentary that outlined Ackman’s claims against the organization.

In February 2018, Ackman exited his position in the organization while Herbalife stock recorded an all-time high. The stock had actually soared 146 percent over the five years of Ackman’s campaign, which The Wall Street Journal labeled “an outright failure.”

For a sustained campaign that produced the best possible results, congratulations to Herbalife staff members Alan Hoffman and Elaine Pacheco. 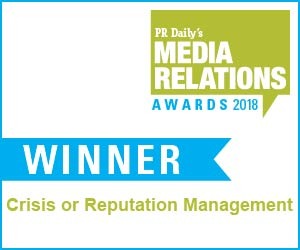