Most Americans are well aware of the strong desire by the Trump administration and the Republican-led Congress to overturn the Obama-era Affordable Care Act (aka “Obamacare”). The American Medical Association (AMA)—which advocates for as many insured Americans as possible—was an early supporter of Obamacare. Its campaign against legislation that would weaken the ACA has won first place in the “Governmental or Public Affairs Media Relations” category of PR Daily’s 2018 Media Relations Awards.
When the ACA was threatened, the AMA and its communication team stepped to the plate to wield as much influence as possible, ensuring the views of the community of medical professionals played a part in the debate. The AMA’s key goal was to articulate its principles so they would become the benchmark against which legislative proposals would be measured.

The media relations strategy brought to bear in support of this goal was designed to build public awareness of the AMA’s position and encourage patients and physicians to contact their representatives and voice their opposition to legislation that would erode the gains Obamacare had made in making coverage available to more Americans.

An advocacy website, PatientsBeforePolitics.org, was at the heart of the campaign, conveying the AMA’s philosophy and nine underlying principles. Throughout the year Obamacare “reform” was on the table, the AMA distributed 31 press releases in response to replacement plans in addition to releases on poll results, placed seven op-eds drafted by AMA leadership in battleground states, conducted seven media trainings with AMA leaders to maintain message consistency, participated in six media briefings and pitched dozens of interviews (and handled requests for many more), securing coverage on all top-tier networks and news media outlets.

Ultimately, the AMA’s outreach produced 33.5 billion impressions through 40,197 broadcast, print and online media stories. With all the conversation around the issue, the AMA earned a whopping 50 percent share of voice. The steady stream of AMA messaging found its way into late-night talk shows and top-tier media editorializing as well.

Congratulations to the communications team at the American Medical Association for its work. 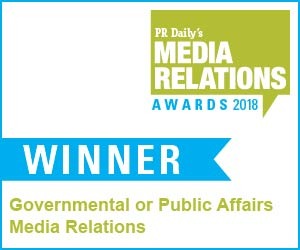