Winner: The Herald Group with The Beer Institute
SHARE

The Beer Institute, the brewing industry’s national trade association, teamed up with The Herald Group to influence Congress and administration stakeholders and prod investigations into the unregulated aluminum benchmarking industry by the departments of Commerce and Justice. The resulting campaign has won first place in the “Governmental or Public Affairs Media Relations Campaign” category of PR Daily’s Media Relations Awards.

America’s beer industry, which bought more than 36 billion aluminum cans last year, has been adversely affected by President Trump’s10% tariff on aluminum imported into the United States.  The team’s strategy employed media outreach with third-party analyses while also identifying key members of Congress who would be instrumental in helping address these policies. The two-pronged approach ensured the public was aware of the messaging and data along with D.C. influencers who would be aware of the public reaction to the information.

The Beer Institute commissioned an economic analysis when the tariffs were announced in 2018 that found the tariffs would cost American brewers $347 million yearly and threaten as many as 20,000 jobs. This data was at the heart of the campaign, which the campaign supplemented with a targeted digital strategy, employing Twitter, Facebook and Google display ads that featured earned media, among other tactics to demonstrate how the price of aluminum under the tariff did not reflect market fundamentals.

To drive this point they released an independent study on the first anniversary of the tariffs that concluded while the U.S. beverage industry paid an equivalent to $250 million in Section 232 tariffs  for aluminum cansheet during March to December 2018, the U.S. government collected only around $50 million of that amount. This study demonstrated how the beverage industry is paying a tariff on aluminum even when the U.S. government is not collecting any revenue from the inflated price.

The campaign garnered more than 1,200 media hits, including stories in top-tier outlets, such as the New York Times, Washington Post and Wall Street Journal. As a result public and government affairs efforts, Congressman Ken Buck (R-CO) and 31 of his colleagues requested the Justice Department investigate aluminum pricing irregularities. Also, members of both the House and Senate introduced the Aluminum Pricing Examination (APEX) Act, bipartisan legislation that would enhance the Commodity Futures Trading Commission (CFTC) and Department of Justice’s (DOJ) authorities over aluminum premium benchmarking entities. To date, 38 members of the House of Representatives and four members of the Senate have officially supported the legislation.

Congratulations to The Beer Institute and The Herald Group. 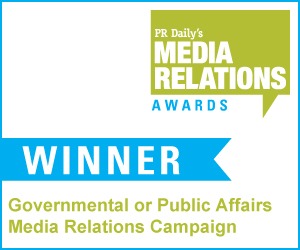