Researchers at the Ohio State University Wexner Medical Center (OSUWMC) had conducted a study to see if they could use electric wires implanted into patients’ frontal lobes to slow the decline of problem-solving and decision-making skills in Alzheimer’s disease patients. MediaSource was tapped to craft a video news release (VNR) to share the study’s findings and bolster OSUWMC’s reputation while driving patient interest in the “brain pacemaker.” The strategic approach MediaSource and OSUWMC took has earned the team first place in the “Media Relations Video” category of PR Daily’s Media Relations Awards.

In advance of production, the team listed the key story elements the video should include, the images to incorporate into the video and the message the video should send. Working in the style of a newsroom, the team created a video which featured a single patient and her husband, their doctor visit post-surgery, interview footage with the doctor that captured his enthusiasm for his work and bold graphics added in post-production that made it easier to understand the science conveyed in the video, especially for the social media version.

The video news release drove 56 patient inquiries about the treatment; the total audience reach from the VNR—including the 524 media placements it earned—was 776 million. Those placements included top-tier outlets like CBS Newspath, NBC Newschannel, Healthline, Quartz, HuffPost and the BBC. Social media outlets from CBS News and others also shared the video. 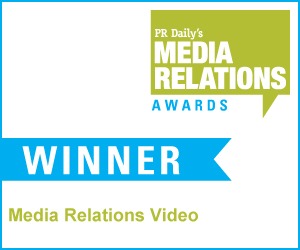