A three-month program that let eBay users sign up for “Bid Protection.” A sweepstakes competition that also provided a Liberty Mutual Insurance quote. A $10 eBay gift card. Those were the components of the effort that led to Liberty Mutual’s win in the “Best Contest” category of PR Daily’s 2016 Digital PR and Social Media Awards.

The prize in the sweepstakes was highly innovative: protection for a bid. If you lost the bid, you’d win it anyway: Liberty Mutual guaranteed it. The prize was awarded to 10 competitors, three of whom won a car.

Already a creative way to drive awareness (not to mention leads), the campaign was enhanced with an influencer outreach effort, customized emails to eBay users (delivered by eBay, Liberty Mutual’s partner in the program) and paid banner advertising.

The competition drove more than 5,000 entries, but more important, it achieved 1.5 billion impressions and produced a 90 percent lift for the insurance organization’s key metric among eBay users. The sweepstakes also produced the highest single-day traffic of 2015 to Liberty Mutual’s site. 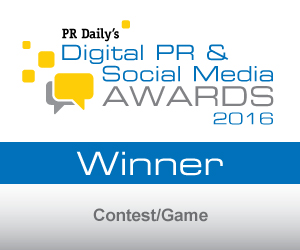