Canadian airline WestJet brings more international visitors to Las Vegas than any other airline. Working with the Las Vegas Convention and Visitor’s Authority, WestJet prepared a special event to attract even more attention to the destination. Its success earned it first place in the “Best Event/Stunt” category of PR Daily’s 2016 Digital PR and Social Media Awards.

Already practiced in producing videos based on stunts that attracted massive attention (such as the airline’s iconic Christmas surprise videos), WestJet planned another surprise for passengers on one flight arriving in Las Vegas. Performer Carrot Top greeted the flight and enticed most passengers to follow him (accompanied by showgirls) to a hangar where they experienced an “upgrade”: entertainment from headline entertainers (including Cirque du Soleil), food from celebrity chefs and more.

The YouTube video of the experience has attracted more than 1.7 million views. In total, the video (published in multiple online channels) has 3.4 million views, and engagement was 56 percent higher than for past WestJet videos. The news media covered the event, with reports appearing on CNN, Bloomberg, and the Huffington Post, among others. In total, nearly 300 media outlets reported on the event. 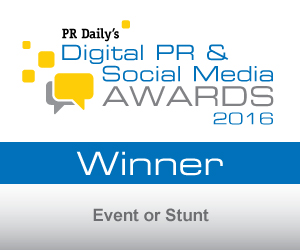