Martino Flynn’s 2015 Holiday Instagram Campaign for Softlips could be a case study in turning a modest budget into a low-key ROI frenzy. Their tirelessly researched and well-executed influencer campaign is the reason why they are the winner in the Best Use of Instagram award in PR Daily’s 2016 Digital and Social Media Awards.

The holiday season (also the chapped lip season) saw the launch of the Softlips Cube Holiday 3-Pack of lip balm, which included a newly released flavor—salted caramel. Softlips took the opportunity to tap into a large segment of Instagram users to promote their new product.

Instagram was the perfect channel for their audience of 13-24 year-olds, the “Lippie” girls and boys who are active on social media and crave the latest in lip gloss trends. The compact and visually interesting cubic packaging of the holiday three-pack lent itself to shareable images and unboxing videos.

Part of the campaign’s success was Martino Flynn’s exhaustive influencer research, during which the firm sought out and painstakingly negotiated contracts with 25 strategically chosen Instagram influencers. The influencers included a world-championship cheerleader, a writer for Teen Vogue, makeup artists and other lifestyle bloggers to whom Softlips sent promotional samples of the product after a contract agreement had been reached. Unlike many promotions whose budgets are split between marketing channels, the Instagram/social media influencer campaign was the entirety of the Holiday 3-Pack’s marketing effort.

The influencer campaign breached the limits of what is possible with a meticulously planned, executed and measured Instagram campaign, ultimately crushing their previous follower and engagement numbers. The Holiday 3-Pack campaign ultimately generated a whopping $275,000 in sales, though its true potential may never be realized—the product sold out before the completion of the campaign.

Congratulations to Martino Flynn and Softlips on their Best Use of Instagram Award! 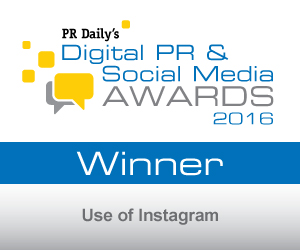