When an iconic candy like M&M’s experiences a milestone birthday, the celebration has to match the product’s reputation. The job of orchestrating the yearlong celebration with the candy maker fell to PR agency Weber Shandwick, which has taken first place in the “Marketing Campaign” category of PR Daily’s 2017 Digital PR & Social Media Awards.

2016 represented 75 years since M&M’s were introduced to American troops in World War II. Weber Shandwick helped news media and fans take a look at the past 75 years as well as a glimpse into the future.

To ensure that the birthday didn’t get lost in the online noise, M&M’s established a birthday hashtag—#CelebrateWithM—and kicked off the campaign with a video featuring a remix of Sammy Davis Jr.’s megahit, “Candyman,” by Zedd and Aloe Blacc. The remix video was introduced at a launch party featuring more than 300 guests, including more than 140 top media figures, nearly 50 consumers and some celebrities.

Supported by Jack Morton Worldwide, Weber Shandwick transformed The Altman Building in New York City into “apartments” that let each of its six M&M’s “spokescandies” show attendees how the colorful characters live through real-life, interactive bedroom displays. After that the content kept on coming, including recipes, GIFs, images and Halloween content.

The campaign also featured a first for the candy world: a 360-degree video featuring the launch party apartments for everyone who couldn’t make it to the event. The video earned more than 3 million combined views across Facebook, Twitter and YouTube; the entire campaign racked up more than 341 million impressions and earned coverage on multiple news outlets including the TODAY show, USA Today, Adweek, CNBC, and Billboard.

Congrats to the “sweet” team at M&M’s and Weber Shandwick. 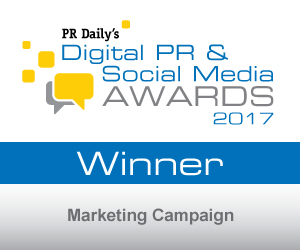