Livia was an Indiegogo project trying to raise $50,000 through crowdfunding to bring its menstrual pain solution—delivered with electricity—to fruition. The campaign was looking to raise funds and build awareness of the product. It was an assignment that must have made the staff at Blonde 2.0 think twice, but it took on the challenge—and won first place in the “PR Campaign” category of PR Daily’s 2017 Digital PR & Social Media Awards.

Talking about menstruation is can be a challenge, given that most such conversations tend to be cloaked in euphemisms and nervousness. The idea that a product using electricity could relieve the associated pain and discomfort would undoubtedly produce healthy doses of skepticism.

Blonde 2.0 assembled an all-female team consisting of agency founder Ayelet Noff along with Sharon Kasslassi and Alona Stein to tackle the challenge. The outreach effort resulted in coverage in top-tier publications like Buzzfeed, Mashable, the Huffington Post, The Next Web, Cosmopolitan, Teen Vogue, Refinery29 and many others.

Blonde 2.0’s work crashed through the $50,000 crowdfunding target, generating nearly $670,000 in funding along with nearly $1 million in pre-orders. These results were achieved with honest humor instead of innuendo and vague language.

The pitch to journalists included the opportunity to try the product; if it worked, skepticism would be erased. The pitch (designed to appeal to young female writers and digital publications) was encapsulated in tagline, “Periods Are Bloody Awful! Livia’s Here To Relieve Your Pain—Want a Review Unit?” Along with outreach to the young female demographic at which the product is targeted (which included GIFs, memes and other digital tools), the creativity and authenticity of this campaign made it a success. 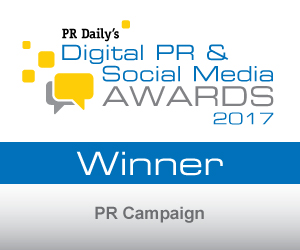