The “Last Empire War Z” video was produced in support of the U.K. launch of a mobile video game that had a solid imprint in the U.S. but was virtually unknown in England. The video was shot with an actor wearing a GoPro in a mouthpiece, providing an uncanny first-person experience with an eye-level view.

The action follows the actor and one other “survivor” of a zombie apocalypse as they are chased through buildings by fast-moving zombies. The chase employs the “parkour” technique (produced in collaboration with a parkour production organization). Parkour is the activity or sport of speeding on foot through an urban environment (Think of the Jason Bourne movies).

The parkour organization, Ampisound, has more than 350,000 followers to its YouTube channel, ensuring a built-in audience that would spread the word. The video produced by Socially Powerful has been viewed more than 24 million times on YouTube alone. Combined with Facebook, views surpassed 100 million. It was shared 1.5 million times, provoked 300,000 comments and trended across multiple social media venues.

The elements were combined expertly, and the effort paid off with views and buzz that are truly worthy of the “viral” label. Congratulations to Socially Powerful for a heart-pounding video. 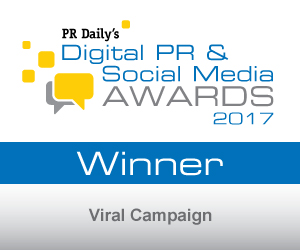