On learning that a friend has had a Down syndrome baby, most people react with, “I’m sorry.” That’s wrong, according to the Canadian Down Syndrome Society (CDSS). “I’m sorry” suggests that “their baby should be pitied instead of celebrated.” Working with agency FCB, the CDSS launched a campaign to achieve one simple goal: “Stop well-meaning friends and family from giving condolences to parents of a baby with Down syndrome.” The campaign has won first place in the “Cause Advocacy” category of PR Daily’s 2018 Digital PR & Social Media Awards

The two-week-long campaign featured a video, “The S-Word,” showing people with Down syndrome sharing better ways to welcome a baby with the condition. Those who saw the video on Facebook were retargeted with three other pieces of content that shared real-life experiences of parents who had heard “sorry” after their babies were born and how it affected them.

Paid search drove traffic to the videos, which in turn led people to Instagram, where the account was loaded up with social e-cards, nearly 10,000 of which were shared. The team also created a six-second bumper featuring Justin Bieber’s hit, “Sorry,” with a warning that the clip contained “inappropriate language.”

Traditional PR also contributed to the campaign’s success. In two weeks, the campaign produced 1.3 billion impressions, 78 pieces of international coverage, 350,000 video views and 48,000 social shares driven by the team’s PR efforts. The organization also experienced a 350 percent increase in requests for educational materials and a 350 percent increase in donations. There’s no doubt the campaign will have a long-term effect of the birth of babies with Down syndrome being celebrated across Canada.

Congratulations to the team at the Canadian Down Syndrome Society and FCB. 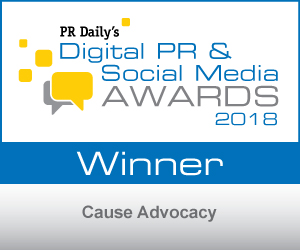