The launch of the Activision game Destiny 2 would be perilous. The original game was well received by most (though it had its critics), but didn’t measure up to the hype that had built up in advance of its release. To overcome these challenges, Activision and its agency partners crafted an ambitious PR and influencer campaign that kicked off six months before the game’s release in order to generate the kind of excitement that would lead to sales success. That campaign has won Activision first place in the “PR Campaign” category of PR Daily’s 2018 Digital PR & Social Media Awards.It had been three years since the game dropped, and a lot of fans had turned their attention elsewhere. Plus, any sequel has trouble with gamers and others comparing the new game to the original. Campaign objectives included re-energizing the game’s fan base, attracting a new wave of players and solidifying the “Destiny” title as a top first-person game. The results the campaign achieved are stunning, including 76,300 media placements, more than 123 billion impressions, 251 million YouTube video views, more than 130 celebrity social media posts and (most important) a No. 2 ranking among bestselling console video games for 2017 and the largest day-one sales ever on the PlayStation Store. An incredible 1.3 million people played concurrently during the first week, a franchise record. How did the team achieve these results? With a world premiere at Gameplay, celebrity activations (including the Yankees’ Aaron Judge and the Steelers’ Antonio Brown), a live-action trailer, holiday fan giveaways and a host of other PR and influencer tactics.Congratulations to the team of Genevieve Waldman, Andrew Meyer, Justin Reynolds, Cami Magnuson, Scott Sheff, Steve Willis, Cary Kwok, Keith Wald, Daniel George, Jonathan Kichaven, Lauren Gilliam, Neil Wood, Steve Cherrier and Justin Fassino. 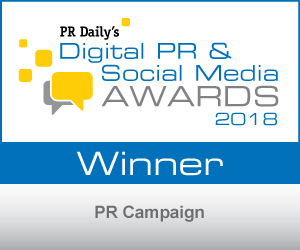