The goal Clearlink set for its work with HighSpeedInternet.com couldn’t have been simpler: Double organic traffic to the site in 2017. It achieved its goal—and took first place in the “Viral Campaign” category of PR Daily’s 2018 Digital PR & Social Media Awards.

The production, distribution and promotion of one piece of content per month that would catch fire might seem like a daunting task, but the team blew Clearlink’s target away, delivering a 500 percent increase in traffic while also earning coverage in some premier news outlets, including Elle, GQ, Cosmopolitan, Esquire, Harper’s Bazaar and Vogue, among others.

The content itself grew from research conducted by Clearlink’s Data Science Team, which analyzed data and trends to find potential stories that were timely, of interest to the target audience and related (even if just tangentially) to the client’s business, a portal for finding a high-speed internet provider.

The content team then produced design and copy for each story while an outreach team used curated news media lists to send personalized emails to each contact. The data-driven stories featured themes like the top guilty pleasure in each state.

Congratulations to Cosette Jarrett and her team. 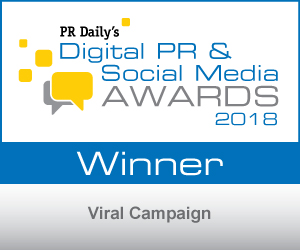