It’s a problem most corporate communicators face at one point or another: No one cares about the intranet.

The employee communications team at USAA was no exception. The team watched as viewership for its intranet, Connect, competed for employees’ attention against external websites and social media. Connect didn’t have a chance.

The team needed to bring employees’ attention back, and ended up successfully doing so through a humorous video series called “Take 2.” For the series’ success, USAA’s employee communications team earned first place in the Best Funny Video category of PR Daily’s 2013 Video Awards.

The decision to appeal to employees through video was a well-researched one. The team discovered that its employee demographics were shifting rapidly; by 2018, millennials would make up 50 percent of USAA’s staff. The team wanted to use a communication method its younger, tech-savvy workers would be receptive to.

The communications team named the series “Take 2” because:

The weekly show debuts on Fridays, and involves a countdown of the top stories on Connect each week while creatively tying them to a timely theme—Darth Vader infecting USAA with the flu virus, USAA employees re-creating Wimbledon, a celebration when USAA hit 10 million members, and more.

Each episode teases the intranet’s stories so employees are inspired to look them up on Connect. Every episode features various USAA employees so people can get the news from workers like them—not just the people in the communications department or C-Suite. No two episodes are the same, which encourages workers to check in every week to see what will happen.

The communications team promotes the videos through Connect-branded office supplies like mouse pads and pens. And because employees star in the videos, word spreads organically fairly quickly.

The goal of “Take 2” was to increase intranet viewership by 10 percent. The series exceeded that goal, increasing traffic by 11 percent. 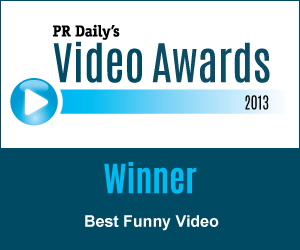