The march of digitization has led many to claim the press release is dead. Yet many organizations still rely on the press release to share important messages with targeted audiences. That doesn’t mean the press release can’t evolve, though, which is precisely what Business Wire has done with the development of BizWire TV, the winner of the “News Story Video” category of PR Daily’s 2016 Video Awards.

The idea had its origins at the 2015 South by Southwest Interactive festival in Austin, Texas, where Business Wire’s CEO and its marketing VP met media icon Al Roker. The outcome is a weekly series, along with a second show, BizWire TV Accelerator Report (produced in partnership with Al Roker Entertainment). That show covers trending news stories published over Business Wire’s distribution network, with a focus on disruptive startups and technologies, entrepreneurs and funding announcements, hot business trends and organizations to watch.

The series has had over 1.2 million views on the Business Wire website and 300,000 views on Facebook and Twitter. Some 3.5 million people follow it, ensuring that the messages in clients’ press releases reach as broad an audience as possible. 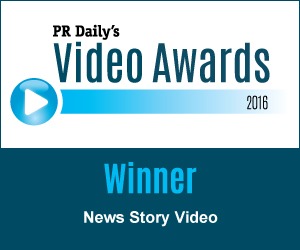