When you think of the National Laboratories that operate as part of the U.S. Department of Energy, you most likely imagine scientists in lab coats. Like any organization, though, these labs need business management professionals—from HR and facilities to IT and communications. Recruiting these people can be a challenge, but Sandia National Laboratories tackled it so effectively that it’s won first place in the “Recruiting Video” category of PR Daily’s 2016 Video Awards.

Based in New Mexico, Sandia National Laboratories works on cybersecurity, nuclear weapons, climate, and energy-related science, but without qualified, energetic people in nonscientific roles, that work would grind to a halt.

To recruit for these positions, the organization identified business professionals on its staff and filmed them in two settings (none of which included people working at desks): close-ups during interviews shot in black and white, and action shots from the Sandia Mountains filmed in color.

The switch between the two formats grabs attention, especially when the action shots include lightning and other sequences you don’t find in a typical recruiting video. This documentary-style production, which delivers its message in less than three minutes, was also designed to inspire existing staff. 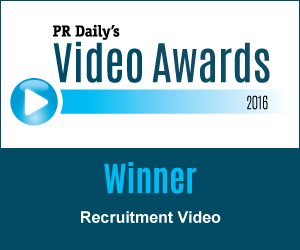