The startling findings from a report funded by the National Institute for Justice (NIJ) on violence among Native American and Alaskan women and men are conveyed in a gripping six-minute video produced by Palladian Partners. That video has won first place in the “Video Infographic” category of PR Daily’s 2016 Video Awards.

More than four in five Native Americans and Alaskans—women and men alike—have experienced violence in their lifetime, and more than a third have suffered violence in just the past year. Palladian Partners, an agency that specializes in government and nonprofit organizations working in health and social science, put together the video that appears on the NIJ’s website covering the study.

The video explores just how prevalent psychological aggression and physical violence by intimate partners are within this demographic group, along with stalking and sexual violence.

Haunting music that calls Native American traditions to mind is accompanied by a female narrator who guides viewers through the data and statistics visualized in motion graphics displayed against a night sky.

The impact of the video, which helps viewers comprehend the scale and scope of the violence through comparisons and data visualization, is heartbreaking—exactly as intended in order to inspire action. 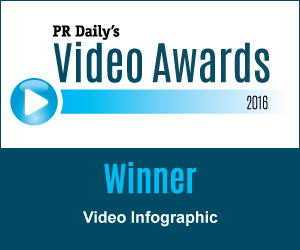