The 17 Lex Society Report is a brochure produced by Baruch College to highlight student and university milestones, and also to serve as a new approach for the college’s fundraising efforts. The infographics designed as the foundation of the report have earned Baruch College, City University of New York’s flagship institution, first place for “Infographic of the Year” in PR Daily’s 2016 Visual and Infographics Awards.

Graduates, however, earn a median early-career salary of more than $50,000, and many achieve exemplary career success. That makes fundraising even more critical than in most universities, guiding the decision to move away from Baruch’s previous text-heavy approach and produce an infographic-driven report.

The 2016 brochure paved the way for all fundraising and stewardship materials produced by Baruch’s Office of Communications, Marketing and Public Affairs, which organized all the information and updates into four categories and used infographics to heighten the focus on numbers that reflected the college’s performance.

The design was supplemented with short sentences, eye-catching artwork, highlighted key words and facts, and great headlines. In addition to earning praise from recipients, the success of the brochure can be measured by the increase in donations during the subsequent campaign over the previous year’s effort. 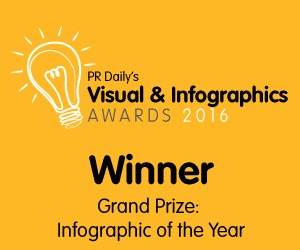