Social media provides a plethora of engagement opportunities, but the medium is not without its risks.

When faced with online ridicule, most brand managers’ instinct is to avoid commentary and ride out criticism until the news cycle turns to another story, trend or misstep. GT Dave, founder and chief executive of GT’s Living Foods, decided instead to lean in, which boosted his brand and netted the organization a huge PR win.

Here’s what PR pros learn from Dave, about social media and the power of humor in a rancorous media climate:

On May 29, YouTube creator Cody Ko published a video called “The Kombucha King,” in which he and creator Noel Miller mocked a video that Forbes created, highlighting Dave:

Ko’s comedic commentary on Forbes’ video about Dave has more than 4.98 million views and nearly 17,000 comments—many which were as unflattering as the roast. Forbes’ video also carried negative comments, but had far fewer views (roughly 245,000).

GT’s Living Foods’ marketing team advised Dave to stay silent while they worked with the company’s PR agency to “fix this.” Instead, Dave embraced the chance to laugh at himself.

My marketing team was initially freaked out and therefore wanted to shield me from the [first] video. I think they were pre-disposed [to] the video being “mean-spirited” even before they watched it.  When I first watched the video, I quickly saw the humor and that it was actually creating an opportunity for us to deconstruct the unusual creative choices that the Forbes Team made for the video (and overall article).

Dave shared the video on his personal Instagram profile with the message: “I love a good roast and I think this video is funny as hell. Check it out if you want a good laugh – at my expense.”

I love a good roast and I think this video is funny as hell. Check it out if you want a good laugh – at my expense. 😉 #KombuchaLair

His post garnered more than 7,000 likes—more than seven times the amount of Dave’s most popular Instagram content. Dave didn’t stop there, though: He invited Ko and Miller to meet with him.

“I was worried that it was going to be a mean-spirited ‘troll-like’ video where they say and do some really hurtful things directed at me personally or at the brand,” Dave says. “I was pleased to see that it was more of a ‘roast’ and that you could tell that Cody is a legit fan of the product so he was cognizant of what lines he shouldn’t cross. That was the impetus for me to reach out to them as I was convinced they were good guys and we could do something funny together.”

On June 26, Ko published another video, titled, “Visiting the Kombucha Lair.” In the video, which has more than 3.88 million views, Ko and Miller get Dave’s side of the story:

Dave shared the follow-up video on his Instagram with the tongue-in-cheek caption: “Who knew being cyber-bullied could be so much fun!”

Who knew being Cyber-bullied could be so much fun! Watch @codyko video on YouTube (link in bio). #KombuchaLair #funnyAF #GTsKombucha

Dave’s decision resulted an outpouring of support from fans of Ko and Miller.

Comments stacked up on Dave’s Instagram post (which has more than 12,000 likes) and both of Ko’s videos. Viewers applaud Dave for his humor and candor—and many started checking out his company’s kombucha. 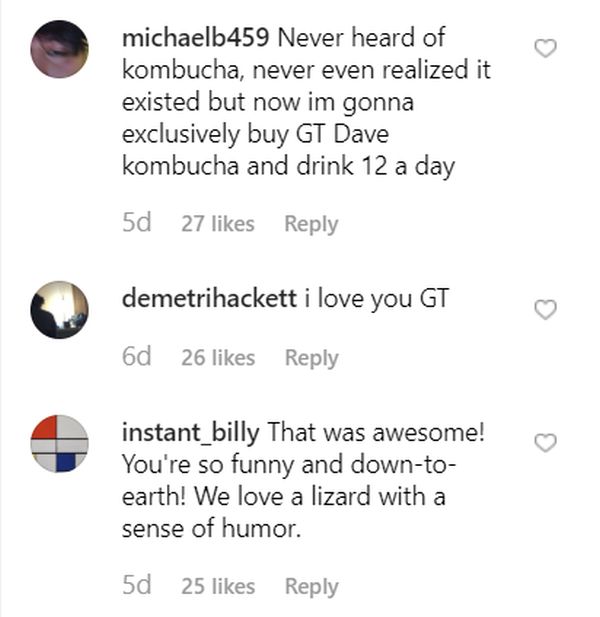 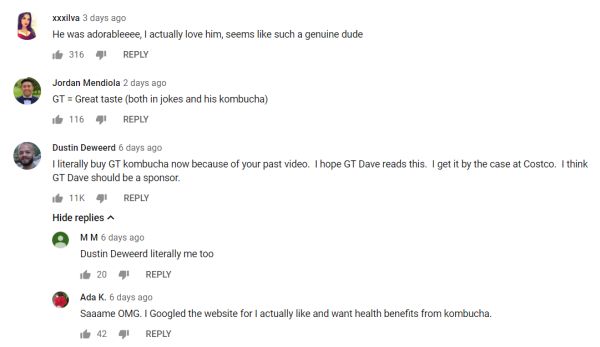 The overwhelming response uncovered a new group of customers for the niche beverage company.

I personally saw a massive wave of consumer reach outs from a different demographic—much younger and not the typical health food consumer.  It was very eye-opening that there’s a completely different segment of an audience that is ready to embrace the brand if we play our cards right.

Can your organization benefit from executive engagement?

Interacting with new fans wasn’t a problem for Dave, who is very involved in GT’s social media strategy.

I work closely with my social/digital and creative team to ensure that we’re curating unique content and properly expressing the brand.  My personal Instagram is the preferred platform of choice to engage my fans and allow them to have a modest peak into my personal life.

His involvement and personal engagement on social media are crucial elements of GT’s Living Foods’ branding. Dave is not only the face of the brand—the company carries his name.

“My role is to humanize the brand as well as protect it,” Dave says. “Like a father raising his child, I’m responsible for the brand’s upbringing and what it ultimately grows up to be.”

However, not all leaders want to be that hands-on with social media strategies.

If you’re thinking of putting your organization’s founder or executives in the spotlight, start with an honest conversation about goals and time commitment.

“It’s a lot of work,” Dave says. “It’s basically like taking on another email account that you need to check and make sure it’s always current.”

Make sure you set reasonable goals and expectations, too. Even if an executive is excited to jump into social media, you should ensure there is a constant flow of information between the social media team and any leaders who share their thoughts online. Many can benefit from social media training, as well.

You also need to be aware of your tone, words and of course any imagery as you’re in somewhat of a hybrid role of still being a brand representative but also being perceived a peer. You have to maintain a balance of a professional position while still having a casual and relaxed quality about you.

The story can also serve as a reminder to PR and marketing pros that not all social media ridicule has a bad ending.

Your chief executive might not want to interact with critics online, but he or she should be aware of current brand sentiment (especially if there’s an opportunity to correct misconceptions, such as with Dave’s Forbes feature).

Aside from your executive’s involvement, your social media team should be transparent and authentic, balancing branded messages with listening to both its fans and other social media users. Don’t worry if you can’t pull off a sassy tone, either: Social media users just want a genuine response.

“The social media community is very sensitive to people who are ‘faking it,’ says Dave.

What do you think of Dave’s response, PR Daily readers?