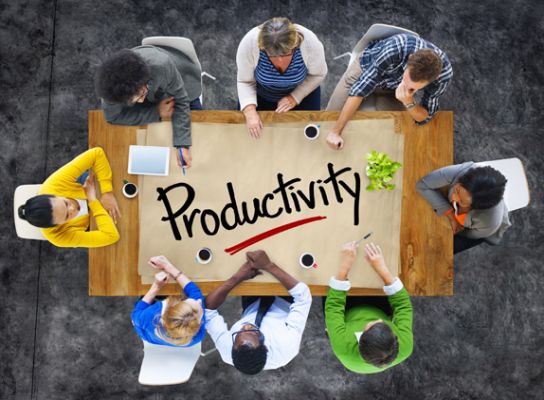 The culture you keep might determine the trouble—or success—that you meet.

Schmookler says those with a high-performance mindset want to sustain it and deepen it. “It’s easy to get up, put in the work and push for greatness when you’re surrounded by others doing likewise.” He says the converse also holds true. “We’ve all heard of workplaces where a new person comes into a low-performance culture and people tell them, ‘Slow down; you’re making us look bad.’ High-performance cultures have people who instead say, ‘Pick it up; you can do it.'”

If productivity is an issue, consider your engagement metrics. Then, review your company culture. Does it encourage employees to feel connected and enthusiastic about the work they’re doing? If not, it’s time to review the culture.

“Without question, the culture of a company is a significant factor in an employee’s level of engagement,” says Todd Davis, who is chief people officer for FranklinCovey and is the author “Get Better: 15 Proven Practices to Build Effective Relationships at Work.”

Davis says engagement drives productivity, along with everything the employee does with and for an organization. “Employees with low (or no) engagement come to work for a paycheck. Nothing more,” he says. “They do just enough to ensure they aren’t put on a performance plan or fired. It’s a ‘check the box’ mentality regarding anything they do throughout the day.”

As Davis points out, when employees are highly engaged, they treat the organization as if they co-own the business. “They care deeply about results and therefore, they work tirelessly to ensure those results are remarkable. Their productivity is extremely high,” he says.

The word “competitive” is typically a positive in business. As Schmookler says, it’s long been understood that competition drives performance. Yet if you have a competitive culture, it could hinder your productivity.

In a Harvard Business Review article, authors Emma Seppala and Kim Cameron point out that “a large and growing body of research on positive organizational psychology demonstrates that not only is a cutthroat environment harmful to productivity over time, but that a positive environment will lead to dramatic benefits for employers, employees, and the bottom line.”

Schmookler says competitive cultures hinder overall productivity, because competition drives individual performance at the expense of team performance. “Teams with good teaming skills accomplish far more together than the sum of their individual efforts would allow,” he says.

The other side of the competitive culture coin is the collaborative culture, one in which cooperation is encouraged over competition between individuals. “The top performers may not produce quite as much, but the bottom performers don’t produce as little,” says Schmookler. “In aggregate, the team produces more.”

“While the culture of an organization and the individual and/or departmental productivity certainly feed each other, in my experience, it’s the culture that drives productivity,” says Davis.

Schmookler says collaborative cultures yield other positive effects on organizations, including improved engagement and retention. “Lower performers learn from high performers and begin to outpace their past,” he says.

Can you detail how your company’s own policies drive your company culture, which in turn affects individual productivity? Some organizations support what Schmookler calls “prescriptive policies” that tell employees precisely what’s allowed and what isn’t. On the other hand, a “principle-driven policy” guides employees to make sensible decisions. For example, he says, a prescriptive policy might say, “Wear closed-toed shoes,” whereas a principle-driven policy would offer, “Dress appropriately for the work you’re doing.”

A prescriptive policy can protect the business, make managing that policy easy and prevent debate, Schmookler says. “The problem is, it carries a more subtle message to the employee: Don’t think. Just do as you’re told.”

Schmookler says principle-driven policies worry many HR professionals and attorneys because they “leave a lot open to interpretation,” which could vary widely from one person to another. That also means managers must sometimes debate things like the appropriateness of their clothing (or footwear) for the job.

“On the surface, that seems like a waste of time,” he says. “It’s a tremendous boost, however, to productivity. The subtle message is: ‘You are a professional. We expect you to think through your decisions.'”

Schmookler says principle-driven policies let employees know their organization expects that they’ll interpret situations differently from the way management does—and even make mistakes—but also that the company will trust the employee to work through it. This fosters independent thinking among employees, empowers them, engages them and lets them learn and take action quickly—boosting productivity.

A version of this post first appeared on the Zenefits blog.