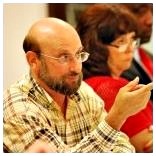 Roger Kerson is the creative director at RK Communications and a communications consultant for the National Council for Occupational Safety and Health. A veteran labor communicator, he has coordinated media efforts for organizing, bargaining and legislative campaigns for the United Auto Workers, the United Mine Workers, the Metropolitan Council of Newspaper Unions, the American Postal Workers Union, the Transport Workers Union and others. Working with the National Wildlife Federation, the Natural Resources Defense Council and other environmental organizations, he has helped communicate the jobs-creating potential of advanced vehicle manufacturing, producing online videos which have drawn thousands of hits on YouTube. His essays, articles and reviews have appeared in the Chicago Reader, the Columbia Journalism Review, Eclectablog.com, In These Times, the Washington Monthly and more.