It’s been 20 years since Edelman launched its Trust Barometer in 2001.

Over that time, the report has tracked the changing public trust in four separate institutions: government, media, business and nonprofit/NGOs. However, the latest findings present a bit of a paradox for the PR industry.

Richard Edelman, who spoke to the Executive Club of Chicago on Wednesday, Feb. 12 about the latest results, put it this way: “With a rising economy, you would expect to have rising trust.” Instead, we see stagnating or declining trust, despite a record-breaking period of expansion for the U.S. economy.

The cause for this contradiction? In Edelman’s words: “Fear has eclipsed hope.”

Part of what is driving this paradox in developed markets like the U.S. is income inequality, along with fear about job losses and disruption tied to tech and automation. Where GDP growth used to be the predictor of trust, now it can be marked by the gap between the highest and lowest incomes in a country. 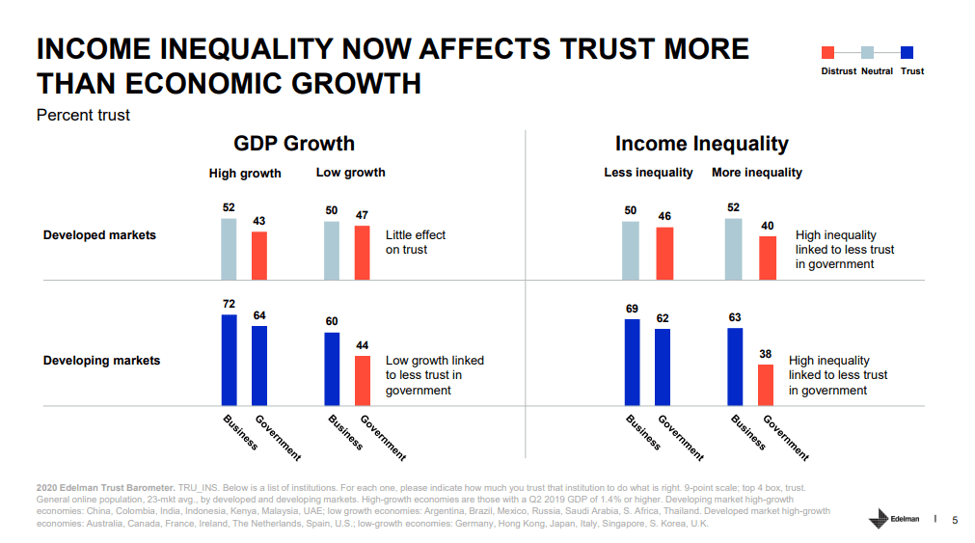 There’s also a pervasive gap between high-information, heavily engaged populations and less-educated mass populations. The mass population has become 14 points less trusting, and 23 markets have double-digit gaps between the informed public and the wider population. 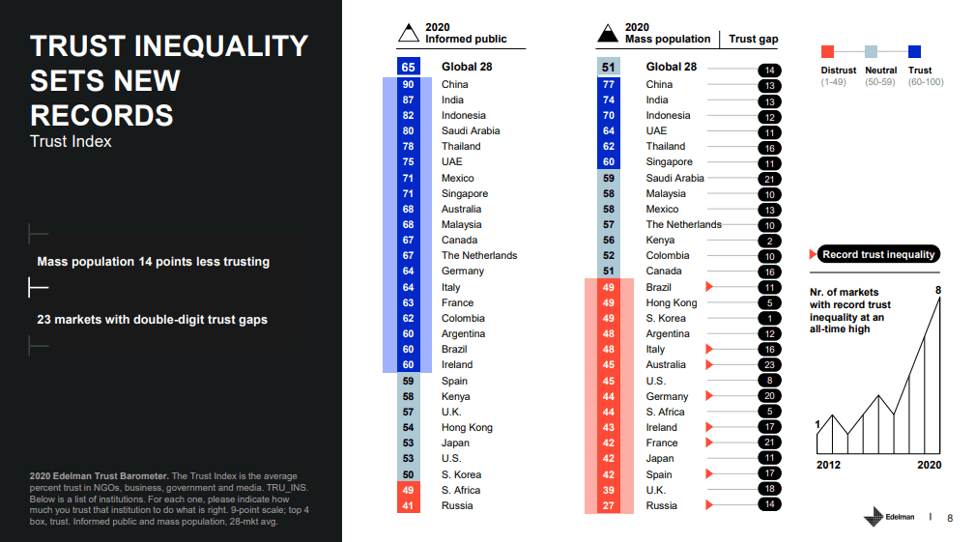 The report found that 56% of respondents say capitalism in its current form does more harm than good.

Edelman says fear underlies this negative view. “Why are we so scared?” he asks before pointing to a startling statistic: “More than 83% worry about ‘losing my job’.” 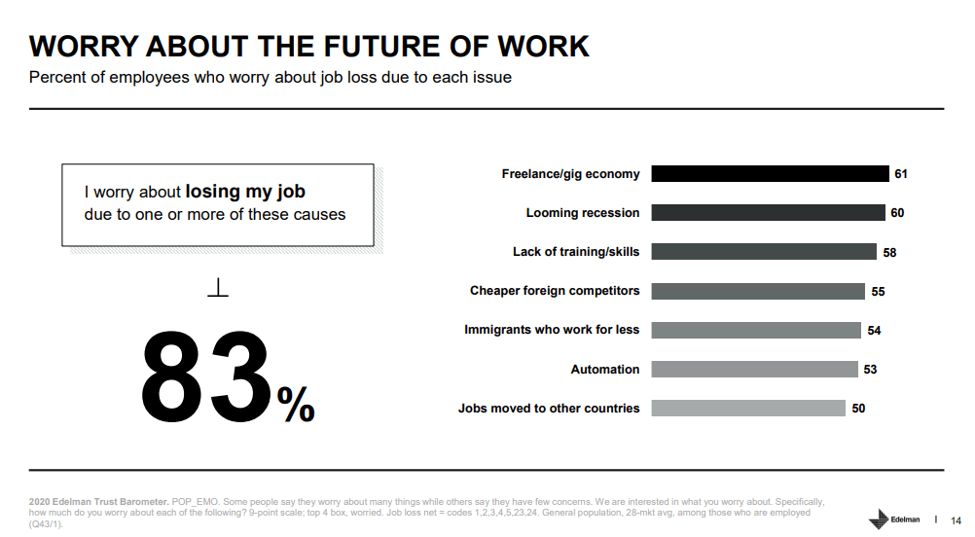 As an example of the real-world implications of this loss of trust, Edelman points to the tech sector, which he says has lost its place as the most trusted industry, in part due to job losses to automation, privacy concerns and the actions (or lack thereof) of certain social platforms.

Disenchanted stakeholders are starting to take matters into their own hands, whether that’s on activism over climate change, workers’ rights, gender equality and a host of other issues. 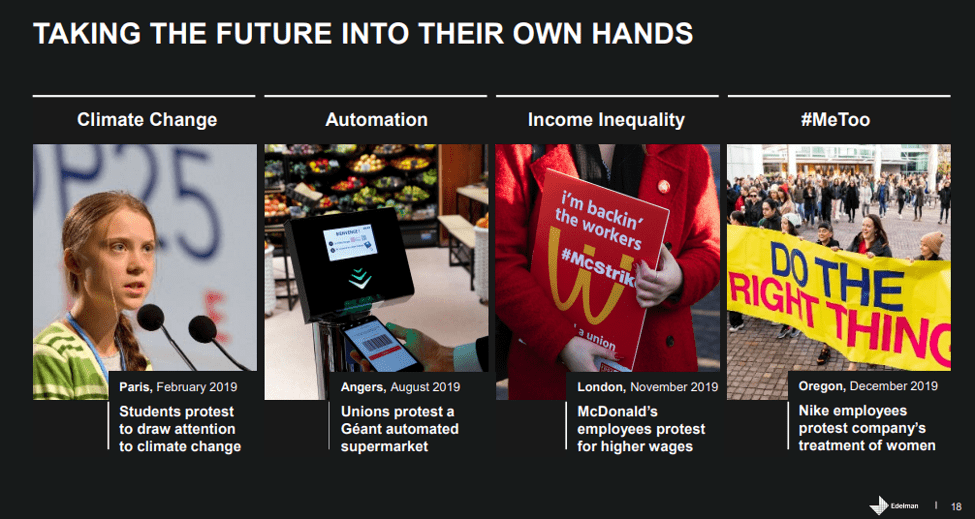 To understand the essential elements of trust, the researchers broke down a central question in measuring confidence over the last two decades: Do you trust a company to “do the right thing”?

Edelman says the “to do” part of the question is tied to competence, and the “right thing” part points to ethical conduct. For the first time, the Barometer breaks down to what percent competence and ethics stack up as components of building trust. 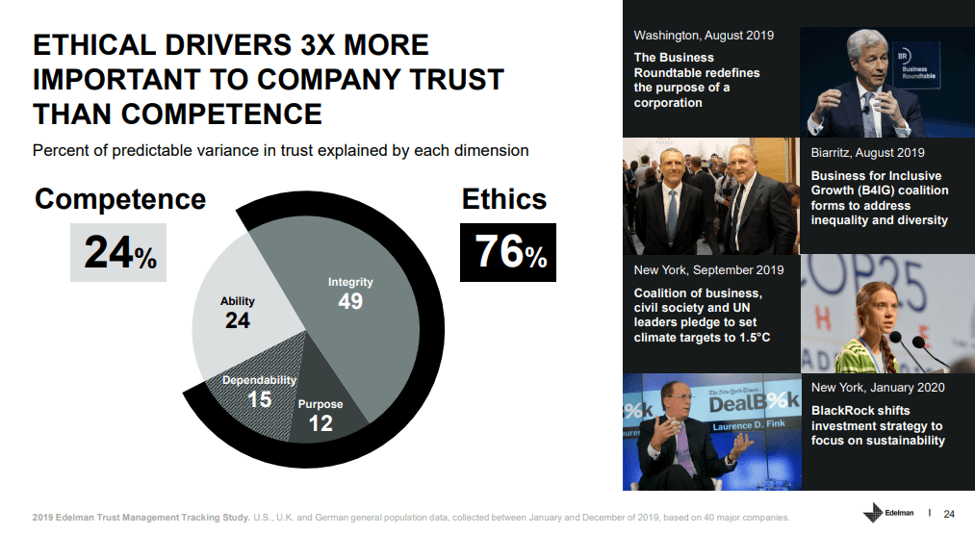 What business must do

“It’s a stakeholder world, ladies and gentlemen,” Edelman says in explaining the actions that businesses must undertake to develop trust with their key publics.

One way he sees for businesses to show their ethical bona fides is for CEOs to take a vocal stand on social concerns. He emphasizes: “92% of people said they want CEOs to speak up on issues of the day.”

For brand managers wondering what those issues might be, Edelman has pointers for identifying hot topics. The issues should “matter to your people … your consumers and employees,” he says. Topics he highlights include income inequality, diversity and inclusion, job losses to automation and employee retraining and climate change/environmental impact.

He also warned against waiting to be forced to take action on these issues. “Don’t wait for government; don’t wait for legislation,” he warns. Per the data he cites, people clearly want the business community to lead. 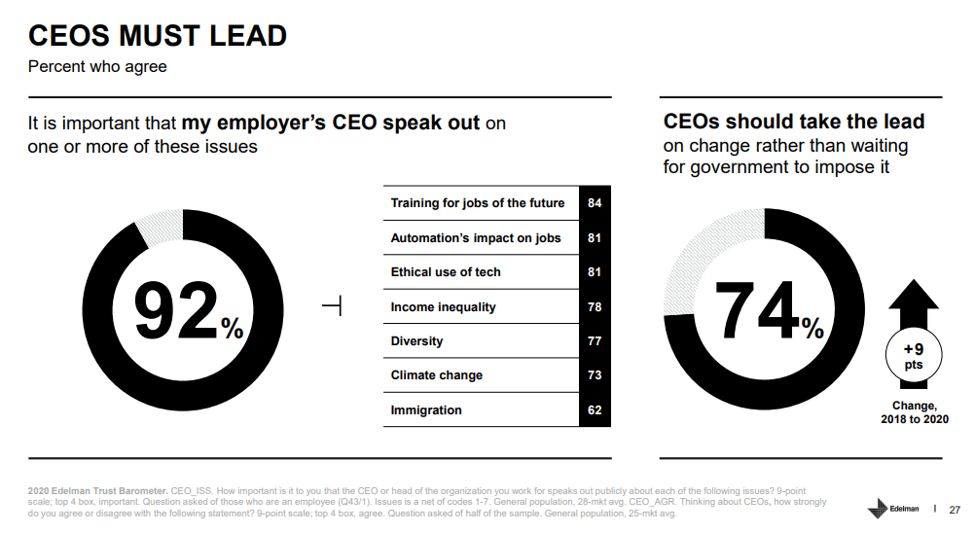 There are other topics that Edelman says are a matter of choice for the CEO, such as gun control and safety, topics that aren’t unavoidable but are vital questions for many audiences. He acknowledges that strong statements will elicit some blowback, but he suggests that action is better than inaction.

“CEOs have to go between the rocks,” he says, arguing that CEOs should strive to be seen as “acting and not ducking.”

What actions can PR pros and business leaders immediately take to start to develop more trust? The Barometer has a couple of strong recommendations: 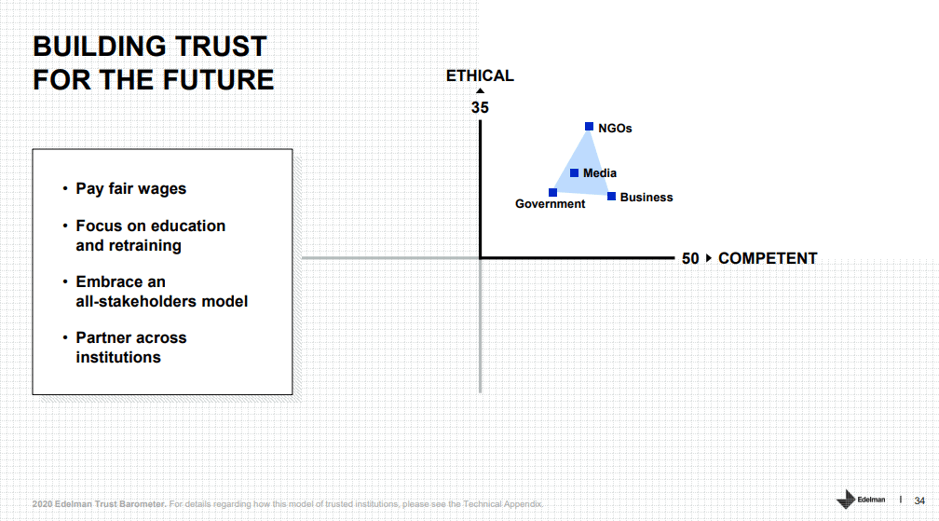 Other highlights from this year’s report are worth noting for brand managers and PR pros. For example, the data clearly indicate that brand managers should stop advertising on media platforms that fail to halt the spread of disinformation: 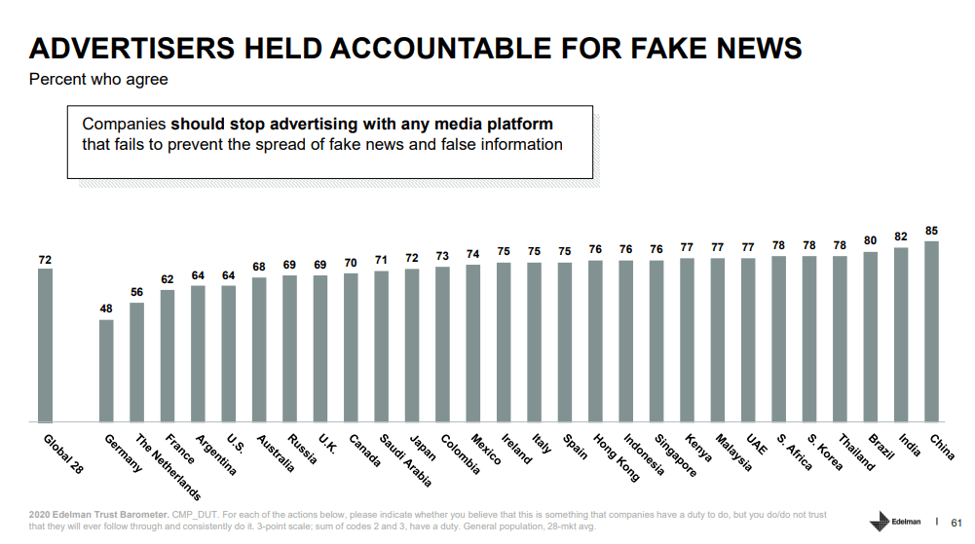 To see all of the insights offered in this year’s Trust Barometer, read the full report.