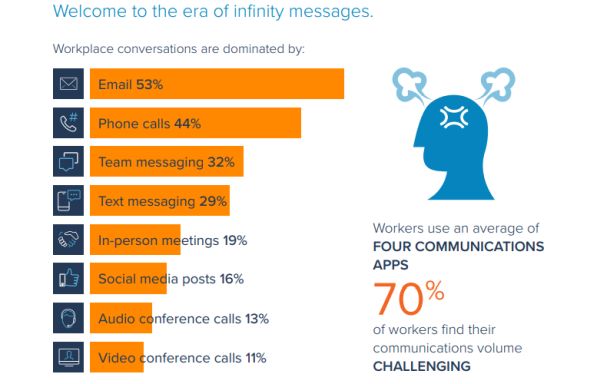 American workers typically get just two weeks’ vacation per year, but a jarring number of them are frittering away twice that amount of time.

According to research procured by RingCentral, 69 percent of workers waste upward of 60 minutes a day “navigating between apps,” which adds up to 32 days a year. That’s more than six workweeks’ worth of productivity down the drain, lost in a sea of apps used for phone calls, texts, email, meetings, video conferences, chat and collaboration.

Rather than saving time and streamlining internal messaging, the proliferation of platforms and the overwhelming array of options apparently are causing communication chaos. Workers are struggling as a result. RingCentral’s survey found:

The survey also revealed a rift between workers’ and leaders’ preferred solutions. Forty-four percent of executives reported being happy with their company’s “current suite of tools,” though 66 percent of workers said they’d prefer having a “single communications platform.”

As for consolidating channels and meeting employee preferences, the survey found:

Technology can be a communications blessing or a time-consuming curse. The onus is on communicators to winnow required apps and shepherd colleagues to a manageable number of preferred platforms.

Read the rest of RingCentral’s report here (PDF), and access an infographic with the survey data here.